How do we impeach our President?

Home How do we impeach our President? 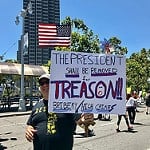 In the past few months there has been a lot of discussion surrounding our President, and if he will be impeached. However, very few people, know the process and requirements for an elected official to be impeached or removed from office. While impeaching our president is not at the top of my to-do list, I still want to be educated on this topic and have a full understanding of how the US government  addresses these situations.

According to the website for the United States Senate, Article II of the United States Constitution states that “The President, Vice President, and all civil Officers of the United States shall be removed from Office on Impeachment for, and conviction of, Treason, Bribery, or other High Crimes and Misdemeanors.” If it is determined that a federal official committed a crime or acted improperly, the House of Representatives is given the case and may impeach (formally charge) that official. The majority, which is 218 representatives, must all agree to impeachment for it to be moved along to the Senate. The Senate hears the trial and if convicted in a Senate impeachment trial, the official is removed from office.

Andrew Johnson and Bill Clinton are the only two presidents to have been successfully impeached by the House of Representatives, however both were later acquitted (free from a criminal charge by a verdict of not guilty) by the Senate. The impeached official continues in office until conviction, and if found guilty impeachment is automatic.

People should be educated on how the process works before threatening and claiming that impeachment is near, when in all actuality it has never happened before.

I am intrigued with your post, “How Do We Impeach Our President?”, because I agree that impeaching the current president is not something that people should focus on. Your article also illustrates a glimpse of the impeaching process which people should know before spreading grapevine that leads to wrong assumptions. However, in my opinion there should be evidences that reveals how our current president is or is not qualified for impeachment. I think that would make the article stronger and more informational. I do believe that Donald Trump is not as substandard as people frequently assert. He has a considerable skill in economics and economic ideas that would actually help the country. This is based on my economics class where we analyzed the laws he wants to pass and how it affects the society.

One thing you said that stands out for me is: “...impeachment is near, when in all actuality it has never happened before”. I think this is confusing because you have mentioned in the previous paragraph that there were actually two past presidents that were successfully impeached.

Your post reminds me of of something I have observed. A vast amount of people in the Philippines, where I am from, wants the current President (Duterte) to be impeached. This issue has been going for so long but no significant action has been made. He even admitted that he killed citizens who were using illegal drugs. But there is a process and rules before an impeachment happen, even though people wants him to step down the “higher up” has the power.

Thanks for sharing your post. I look forward to seeing what you write next, because I do think that your articles are informational especially to youth like us.