How can we limit gun violence?

Home How can we limit gun violence? 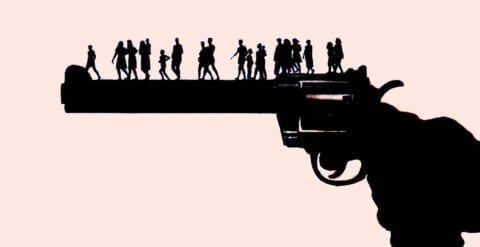 The issue of guns in America is one of, if not the most important issue that envelops the country right now. As more shootings take place in this increasingly polarized climate, the debate over what role guns play and who should own them is always pushed more to the forefront. It is a problem that needs to be addressed or else it will remain. Everytown Research states, “Every day, 100 Americans are killed with guns and hundreds more are shot and injured.” This very high number of people who are killed by guns every day is why this issue is so important. The effects reach far beyond just deaths. Fear and psychological hardships also come with the violence and destruction a person that should not have a gun can create.

There are an average of 36,383 deaths per year that are caused by guns. One third of these deaths are homicides. In the U.S. there are 4.1 gun homicides for every 100,000 residents. This is quite high, even higher than some third world, war torn countries. It is higher than Canada (0.3), Germany (0.2), Italy (0.3), Greece (0.2), etc. Compared to these developed nations, it is extremely high. One reason that can be attributed to this is the ease of access to guns in America. In certain areas, after one turns 18 and goes through a simple background check, you can buy a gun. This makes it much easier for the mentally ill, for example, to buy and use them.

Another way that any meaningful reform is slowed down is the second amendment. Gun advocacy groups, such as the NRA, use the right to bear arms as a means to keep politicians from restricting gun laws for reform. In order to ensure guns fall into the hands of good people, there needs to be a more extensive screening process before authorization to purchase anything. Many countries require a psychological screening before receiving the ability to purchase them. Keeping guns out of the hands of bad people while still maintaining freedom is the difficult task before us. Only when we find a good balance of those two ideas can that value of 36,383 be brought down.

Hey Matthew,
I thought you made some good points on gun violence, a massive problem in America. The statistics that you provided are really shocking. I think this article from time magazine will aid you in finding more solutions to this problem: (https://time.com/5209901/gun-violence-america-reduction/).

Hell Matthew,
I enjoyed reading your post and thought the statistics you put into this post made your claim that we have a issue much stronger. I think you may enjoy this article I found online https://everytownresearch.org/gun-violence-america/
Sincerely, Timmy