How Can We Decrease Worldwide Homelessness and Poverty??

Home How Can We Decrease Worldwide Homelessness and Poverty?? 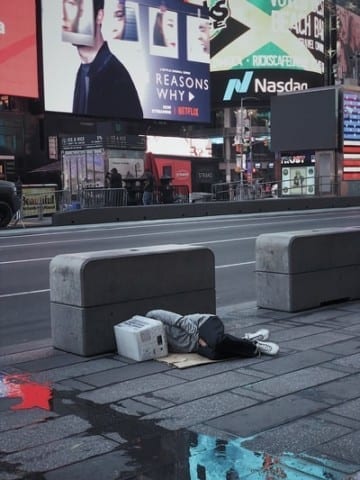 I just read an article that advocates for anti-homeless laws, explains why they exist and how homeless people are mistreated by charities and state welfare. This brings a new perspective to homelessness, an issue commonly addressed by acts of charity and state-funded relief programs. The author argues that while anti-homeless laws, require violation as means of survival, they encourage people to work hard rather than lean on the backs of their hardworking providers.

The article I read introduces a new perspective to the solution of homelessness and poverty. Homeless criminalization depicts a transition in approach from holding those who have experienced a lack of housing, unemployment, and poverty accountable and encouraging them to work hard to regain their status in society. ” This positions homeless people — as part of the working class — to not only shrug off the oppressive yoke of poverty and exclusion from public space but to break its political-economic basis: exploitation,” says Hennigan.

So maybe acts of charity aren’t the only way to end poverty and homelessness. Maybe it’s a mix of accountability, hard work, morals, and ethics, that will combat homelessness.

I didn’t know how serious homelessness is right now. After reading the post, I realized that I knew very little about the world. I believe that the two-part “homeless people are forced into employment programs where they can generate capital into the economy rather than rely on those who have jobs for survival,” and “So maybe acts of charity aren’t the only way to end poverty and homelessness. Maybe it’s a mix of accountability, hard work, morals, and ethics, that will combat homelessness,” is the most important because many people don’t know how homeless people are being forced to do work and how they are treated. Acts of charity aren’t going to help homeless people with going through force. I believe that accountability, hard work, morals, and ethics are a great way to help them but also can give help by stopping and reporting when sighting the scene.

This is a very interesting yet important topic to discuss. Thank you for sharing the article with us Grace.
Before now, I never realized that homelessness was this serious. I thought it was all resolved and over. And now I read your post and I thought. “Wow. This is really bad.”
Your last paragraph, “So maybe acts of charity aren’t the only way to end poverty and homelessness. Maybe it’s a mix of accountability, hard work, morals, and ethics, that will combat homelessness.”, it was really touching. It really got me thinking about how it’s their fault that they ended up like this. I’ve always felt sorry and pity for them. Now, I don’t know what I should feel toward them. Accountability, hard work, morals, ethics. These are things we should always remember.
As for the employment program, I’m not so certain about it. I know that it might help the homeless people for jobs, but they didn’t work hard enough in the first place. What would happen the second time? I guess it all depends on how their minds are set.
Thank you for talking about this. I really liked the way you added the article you have read. I am looking forward to your next writing.

Firstly, this is a very important topic and I’m glad that you brought attention to the epidemic of homelessness that has plagued our country. I think two important factors to be considered while speaking about homelessness should be considered as well – mental health and drug addiction. These two things often lead to homelessness and a large chunk of the homeless population throughout our country deals with these factors on a daily basis, and it’s a big part of what keeps them homeless. I like your finishing sentence a lot, because I think it’s true. I think that charity is not the only way that homelessness is going to be fixed but through hard work by the rest of the population.

Dear Grace,
First of all, I wanted to say that I like that you chose to write about this major problem in the US that many people dismiss and ignore. Also, I just wanted to add to this discussion that I’ve seen and heard many people talk about homeless and instead of feeling empathy for them and try to help them out, they say “they are just being lazy and don’t want to get a job.” It infuriates me when I hear anything like this because people judge without seeing their side of the story and just assume that things can be easier for them if they just tried. I know that getting a job is hard, especially if they don’t have a home, and we don’t know the circumstances they have faced that led them to this hard life. I believe that if people understood what they are truly going through, more people would be willing to help them out or create more programs to do so.

You mention a very interesting point towards the end of your writing. This being the fact that we as a society need to change how we view homelessness. Instead of criminalizing the homeless, we need to encourage them to find work. Because if the homeless become participators in the consumer economy of the United States, then our country as a whole will become stronger.

I am intrigued by your post, “How Can We Decrease Worldwide Homelessness and Poverty?” and how you brought out an issue that isn’t as discussed as much as it should be. I understand the importance of homelessness and how being pressured into gaining employment isn’t the answer for those who need assistance. Though said, homelessness criminalization does help encourage people to gain their status in society and regain their lives through employment.

One sentence you wrote that stood out to me is, “Maybe it’s a mix of accountability, hard work, morals, and ethics, that will combat homelessness.” Instead of putting homelessness on those who help with charity, those who are homeless must also be accountable for what they have experienced or condoned.

Thank you for this writing. I look forward to what your next writing is, because you bring up issues that need to be addressed more often. I would like you to continue writing about your opinions for those who might find your opinions relatable.