How American should proceed in the Middle East

Home How American should proceed in the Middle East 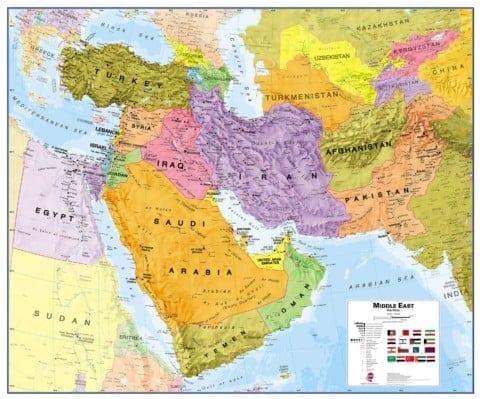 American intervention in the Middle East is an extremely relevant issue in recent history, especially with what recently happened in Iran. Many people in the middle east are impacted for better or for worse by American Intervention. There are many lives on the line, including the young men and women serving the American military, and everyone, including civilians, in the Middle East. America has had a long history of intervening in the Middle East. Back in 1953, the CIA overthrew the democratically elected leader of Iran in order to reinstate a Shah who was more willing to cooperate with us. I find that very ironic, since we pride ourselves on being the worldwide guardians of democracy. As professor of history at University of North Texas Nancy Stockdale writes, “On the one hand, the United States promotes the ideals of democratic government, free market economics, and self-determination for the majority, but on the other hand, it has both openly and covertly supported some of the most oppressive governments, including Iran, Iraq, and Egypt, as well as the occupying military government of Israel.” The people of Iran didn’t like the Shah, which eventually resulted in the Islamic Revolution in 1979. After the Shah was overthrown, he fled to America. Iran wanted him back so they could try him for crimes he committed, but we wouldn’t send him back. Some Iranians were enraged and America was harboring a criminal, making us complicit in his crimes. In response, they took 52 American diplomats and citizens hostage, which is a violation of the Vienna Convention. More recently in 2011, Americans helped take out Ghadafi, the dictator of Libya, and messed up that country, leaving several warring factions fighting for control.

We have also caused the deaths of many civilians, such as an airstrike in Afghanistan which recently killed 30 innocent farmers. By fighting with such force, we are creating terrorists out of the friends and family of the victims, who lost someone close to them due to the U.S.’s obsession with control of the region and revenge on those who opposed them. Imagine if your parents or siblings were killed in an airstrike, I’d imagine you would be pretty upset with the country that did it. 9/11 happened for a reason, it wasn’t just a random attack by people who “hate our freedom,” it was an act of revenge on us playing god and messing with people’s lives and governments in the Middle East. President Trump’s recent aggression towards Iran has proven that we still have not learned the lessons we needed to have learned from 9/11. If the President’s claim is true, that the Iranian general was plotting an attack on the American embassy, our response should have been to leave. It is better in the long run to avoid this conflict, even if it means giving up some control. We have proven that we are unable to ethically resolve these conflicts effectively and we should always be trying to de escalate, or else these issues will expand and lead to even bigger wars down the road which future generations will have to face. As Albert Einstein said “Peace cannot be achieved by force, it can only be achieved by understanding.”

In order to gain a better understanding of this topic, I would like to look into other things we have done in the Middle East, such as our relationships with Israel, Afghanistan, Syria, and Iraq.

Hi Topey,
I liked your article about the Middle East and American intervention, it’s a very complicated and complex region. The people there tried to free themselves from a long period of dictatorship (presidents and leaders of the area) who basically ruled the area with an iron fest, silenced any voice of freedom, and limited any economic growth for their citizens. For this reason, we witnessed the Arab Spring Revolution which resulted in a lot of changes in the region, some changes were very negative and even costly. This is due to the control of these dictators very strong.
I hope in the future, people will gain their freedom and the region will be stable again without any foreign country interfering.

Hello Topey, I thought this article was very well-timed due to so much happening in the news with the Middle East. Personally I didn’t know half of the events you discussed, so this was a great small summary of what has led up to all of the new conflict that I didn’t know the history to. I also liked how you linked all of this to 9/11. Looking back it’s a clear and easy comparison to make, but I didn’t think about it and the connection you made to it really helped with my understanding of the analysis you were making with all of the US and Middle East conflict. I noticed that you would like to further research what other actions we have done in the Middle East, but I think it would also be helpful to look into what the Middle East has done in the US (I don’t know of anything other than 9/11 so more information about that would be good for creating a better picture of the history around the topic). Overall this was one of the best articles I have read on youth voices and I thought it did a great job of summarizing all that has happened in the news recently.