Housing Epidemic in the Bay Area 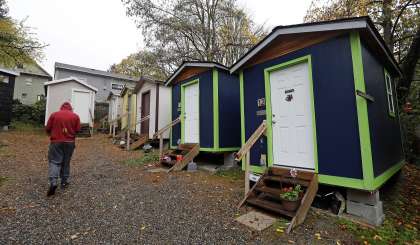 The Bay Area housing crisis is an important issue to me for the sole reason that I have grown up, and still live, in the Bay Area. Nearly every day, I see homeless people on the street, and every few months I hear about how some fixer upper that got some work redone sold for over a million dollars. Anyone living in the Bay or even just California is affected by the high cost of rent or housing. The Bay has countless employment opportunities, but not nearly enough housing for all the jobs here. People are impacted by this every day, if you want a good example just look at the enormous rate of homelessness here. As of 2017, there are at least 28,200 homeless individuals in the Bay Area. Part of this enormous homeless population is that people want to live and work in California. In 2004, the bay accounted for “only 4% of the states total population.” By 2017, 20% of all new Californians were either “being born in or moving to the Bay.” (KQED, “5 Reasons California’s Housing Costs Are So High”).

And for good reason too, the Bay especially has countless job opportunities. Projected from 2010 to 2040, The Bay has generated 62 percent of new employment projected for then, while only generating 21 percent of the necessary housing. According to the Bay Area Economic Institute says that California has “3.5 million fewer homes than needed,” resulting in homes costing “2.5 times the national average.” (BAEI, Page 22). According to the space housing department, “it’ll take 180,000 new units of housing per year to keep prices stable, yet we’ve built less than half of that since 2008.” (KQED). Homelessness is a pressing issue for anyone living here, that much is not necessary to say. But having homelessness in this sort of excess, is is clear to anyone that there must be something going on to make it like this.

In recent years good progress has definitely been made. Awareness to these issues are being raised, which is helping build affordable housing in bulk. Building housing like this is a really great way to fix this, but it’s coming way later than we needed it to. A good, and simple, solution to any sort of call to action is to simply raise awareness about this being an issue. However, while that is still an excellent way to help, this is an issue that is prevalent throughout all of the Bay Area. In my opinion, a far stronger way to help is by helping them yourself. Donate to a homeless shelter, volunteer at a soup kitchen, anything in your power you can do will help. Raising awareness is of course, important. However, I believe that simply raising awareness may not be enough. Actively doing something to help the community, and getting your hands dirty is much more valuable than just mentioning something to your family during dinner.

However still, in order to better understand this topic, I would have to look into things like rates of housing being built, and how much housing we would really need for 2020 and onward. As well as who builds housing and more reasons as to why it isn’t being built in bulk. However not all of it has to be on the negative side. Researching what people are doing to assist the homeless and helping out,to get them back on their feet.

Dear Theo, I am aware that housing in the bay area is a huge problem, but what will we do with those mentally ill, and those who abuse drugs. We can’t make housing for them near a good neighborhood because it will affect the property values of many homes nearby. One sentence that really stood out to me is “Awareness to these issues are being raised, which is helping build affordable housing in bulk.” I am glad to hear that something is being worked on for those who actually seek to better on their lives. Thanks for your writing, I really look forward to see where the bay area will lead in the future. Neftaly Mateos

Hi Theo,
I agree that homelessness is a huge problem that needs more attention in The Bay. It’s become too normal to see mass numbers of homeless.

Hi Theo, I really enjoyed this article. I see every day walking around Berkeley that this problem is massive but I didn’t know any of these numbers. I liked that you acknowledged that bringing awareness is not enough anymore, people are acting as if there helping but then stepping back when anything actually needs to be done.