“I would just say to the politicians, what if it was you? What would you want, in the terms that you were homeless, what kind of care would you want? Because I’m sure if they put themselves in their shoes they wouldn’t be as greedy with the tax money as they are”, Cynthia Morales-Cordova, a college student from Merritt College and a lifelong Oakland resident said this in our interview. Cynthia understands that in order to decrease homelessness we need to give the homeless community an extra push so they can get back on their feet. Many politicians don’t pay much attention to homelessness and think that it is the least of our worries but the truth is that it is on the top of the list. Oakland has always had a struggle with the homeless community and current events such as gentrification are just making it worse. This problem will only go away if we all come together and help them find resources inside of their own community.

Homelessness is caused by many things but as gentrification occurs in our city it is safe to declare that in Oakland housing/rent can be one of the most common current causes of homelessness. In the article , “United Nations Expert Describes Oakland and California’s Homeless Crisis as ‘Cruel’” by Darwin BondGraham, BondGraham writes about many political problems and how they can affect a community, this article explains how homelessness has grown throughout the years in the Bay Area. BondGraham wrote, “Oakland’s homeless population is conservatively estimated at 2,761… Some are employed but can no longer afford the cost of housing in the Bay Area”(BondGraham). “Employed but can no longer afford the cost” shows that individuals can still be determined workers but the toll of gentrification is making even those who are strong workers be at risk of homelessness. This brings up the fact that people may be struggling with homelessness but they still have that extra weight of having to keep their health problems from worsening which while being on the street can be much more of a struggle. This breaks the dominant narrative that homeless people are “lazy” because before rent went up those individuals most likely still had a house and might have barely been making the payments but they still had a roof over their head but once the wave of gentrification came over us that hard work no longer reflected on their housing status which forced them to become homeless.

As a community there are some programs occurring, but more needs to happen. For example, in another article by Darwin BondGraham called, “Oakland and Berkeley Homeless Sweeps May be Unconstitutional”, BondGraham talks about Oakland’s state with homelessness and what Oakland is doing to address it. He writes ,“Alameda County’s shelter system has been overwhelmed for years. An official count of homeless people in 2017 found 3,863 unsheltered people on any given night across the county, mostly in Oakland and Berkeley. But there were only 1,618 emergency shelter beds”(BondGraham). This quote is important because it shows that although Oakland and Berkeley have spaces in shelters they do not have enough and that shows that clearly even the organizers of those shelters can’t see how immense this homelessness crisis is. The most important words in this are “3,863 unsheltered” and “1,618 emergency shelter beds”. These words are the most important because if homelessness keeps growing and without action, people would not be safe from the rain, weather, and other elements. There needs to be more beds or resources that will give them a choice to be indoors. This makes it seem as if politicians least worry is who is out in the streets due to gentrification but instead they only give a limited amount of money to those who were impacted during the renovation of our cities and expect that to be enough.

Solutions are needed, starting with housing. “People should get housing first and then we can address other things”, this was said by Caitlin Christensen (Life Academy teacher and past social worker). This solution was addressed by all of my interviewees and this comment is true. We expect the homeless community to better themselves not taking in account that they don’t have the same privilege as us to be able to come to rest under a roof not worrying whether it will be cold or rain.

Based on all my research we should approach this problem just as the state of Utah did. In the article “Utah chronic homelessness down 91% under decade-long initiative” by Marjorie Cortez(a long time journalist that always writes about current events in Utah and writes about recent problems we go through). Cortez writes, “Utah has dropped 91 percent in the past decade under Utah’s “Housing First” initiative, state officials announced Tuesday”(Cortez). By giving the homeless community housing, we can nearly eliminate the problem of homelessness and give them a new start in our community. This can also be supported by the graph that Cortez included in her article shown in the right. 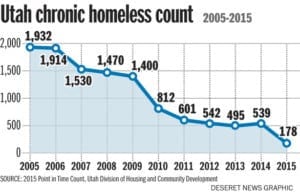 This graph shows that the homelessness count went from 1,932 homeless people to only 178 people in just ten years and in only a few more years those that are still homeless might possibly not be anymore because of the housing program that let them focus on life and not where they’re going to sleep that night. Some may argue that the politicians are doing all that they can and that the homeless also need to take on something but how can a flower bloom if no one waters it.

In conclusion, if we want to decrease homelessness then we must give them housing because unlike any other solution this allows them to not have to worry about being exposed to the night because we will show them the light after the dark tunnel that leads to a new life.

This article is about the rights that homeless people should have and what can make it easier for them to get back on their feet. Darwin BondGraham is a longtime writer that writes about problems going on in our cities.

This article talks about how homelessness people are being made laws against camping out in the only place they can go which is the street. It also talks about how unreasonable this is due to the fact that they have nowhere else to go. Darwin BondGraham is a credible source because he is a longtime writer that always writes about political problems.

Caitlin Christensen is a Life Academy teacher and a past social worker because she has experience with helping those who need resources meaning that she knows what resources would help people rise up and keep going.

In this article Marjorie Cortez talks about how homelessness has gone down in Utah and what tactics they used to decrease the amount of homeless people. This is a credible source because Marjorie Cortez is a professional journalist that writes about what is going on in Utah.

Cynthia is a lifelong resident of Oakland,California and a student at Merritt College which means she has seen Oakland through its ups and downs.

I am impressed by your post, “Homelessness: Are Politicians Doing Enough?” because it is interesting how much homeless people there are in Oakland. I think it’s odd that politicians aren’t doing much about this issue because it is something that should definitely be talked about.

One sentence you wrote that stands out for me is: “An official count of homeless people in 2017 found 3,863 unsheltered people on any given night across the county, mostly in Oakland and Berkeley. But there were only 1,618 emergency shelter beds” I think this is shocking because it would be sad to think about the homeless people that don’t have any shelter.

Thanks for your writing. I look forward to seeing what you write next, because I like the way you elaborate on topics like this. I would like you to continue talking about significant topics.

Hi Lupita! I enjoyed reading your post. You did a great job integrating your evidence to support your points regarding the rise of homeless populations due to gentrification. I’m saddened to hear that this issue is occurring in Oakland because it is also occurring here, in the Los Angeles area. I think it would be useful if you thought about the following questions in order to strengthen your argument: Do you think that politicians are truly 100% at fault for this issue? How can the community come together to support new housing and infrastructure for the homeless population? I would love to hear back from you! 🙂

Thank you for taking time out of your day and responding to my blog. To answer your questions, the politicians aren’t 100% at fault but they are the people that are in control of where certain money goes and they oversee what happens in their community. So, since they haven’t fully tried to address this problem they are slightly only contributing to worsening it because they haven’t taken action to make it better for the homeless. To answer your question about how the community could help is they could give some canned food because it can be preserved for a long time. But to support the housing they can give food or supplies/furniture that they don’t need, that way the city provides the housing but the community provides the sense to feel at home. Hopefully I have fully answered your questions. One question that I have for you is, if you were in the shoes of a politician what changes would you make to your community to support homeless people? I hope you have a great day!:)

Thank you for replying! I appreciate your thoughtful answers. It’s always good to consider the other side of the argument in order to improve your own. Hmmm that’s a good question. If I were in the shoes of a politician I would 1) allocate more money to building and maintaining homeless shelters and 2) I would try to empower businesses and individual citizens to support the cause by donating their time, money, and compassion.

You should check out this article: https://www.ocregister.com/2018/12/14/in-seemingly-rapid-fashion-much-has-changed-for-orange-countys-homeless-population/. It’s a good example of how local government can and does aid the homeless.

I hope this is helpful!

Dear Lupita,
I really like how you explained a way that we can help solve homelessness. I also like how you explain why some people are homeless because of how house rent is rising up. I really like how your paragraph actually shows how you care about how there alot of homeless people around the bay area and you showed a lot of empathy while you were writing your paragraph. I like how your ideas show how much empathy you have and what we should do to support the homeless community and help them get a new start. It really showed your thinking when you used the graph people the graph shows me how the amount of homelessness is decreasing.

Dear Janie,
Thank you so much for reading my blog. Thank you for all the positive feedback that you gave me now I will know what to keep going on in my future post.