How the “History Of Septa” Represents My Neighborhood

Home How the “History Of Septa” Represents My Neighborhood 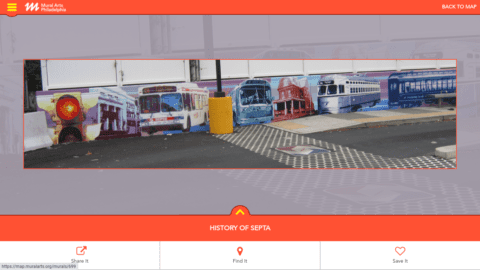 The mural I am doing in my neighborhood is titled the “History Of Septa.” It is located near Cottman and Torresdale. It is a mural I am very familiar with. It is located very close to me, so I go to visit it sometimes because I love the creation of the mural.

I don’t exactly know the meaning of the mural but I know it means something special to my neighborhood. I lived in my neighborhood for about 6-7 years. So I have passed this mural about a million times.

I didn’t exactly notice it the first time I walked past it but once I started to notice it I saw how amazing the mural looked. And became very familiar with it being in my neighborhood.

My experience visiting the mural was incredible. I loved the way it was created to show the importance of the transportation center in my neighborhood. I would not want any other mural there.

The first person I told was my dad, I told my dad about the mural being in my neighborhood because I used to always get on the bus with my dad there. The mysterious question I asked first was  “DID YOU NOTICE THE MURAL?”

He said “No,” but then he said, “It looks amazing, I am surprised I didn’t notice it.”

I told him that it represents my neighborhood. I also told him how much I loved and admired it. I also talked to my mom about that mural being in our neighborhood, and I asked, “Do you like it?”

She said “YES!” She went on and told me how much she adored the mural. And how much it feels at home when she goes to see it.

What I think would have happened before I visited was that they were going to replace it with something different. Because that mural has been there for years.

I wouldn’t replace the mural for anything. I am feeling a general feeling of happiness that the “History Of Septa” mural represents my neighborhood. I will continue to visit it and admire it.

it’s just some buses on a wall. very creative