Henrietta and her Family

Home Henrietta and her Family 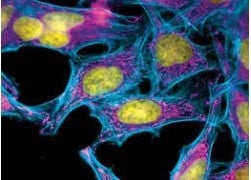 People call someone cells in one vial for over 400 dollars and the family of those call didn’t even make a penny. Me and my classmates researched and watched a movie about a woman who had tumors in her clitorious and she died but her cells from her tumors are still alive. I believe that her family should receive money or a profit of those sells. The reason I believe that Henrietta Lacks family should receive money because when she had the surgery they never asked for her consent if they could use her DNA but I also believe that the family should also receive money because the people who sell her DNA a way,didn’t know her name, they lied to the law and he disobeyed the hippocratic oath and deceive what science should be all about and doctors are about. In a website that talked about what happened to Henrietta Lacks they pointed out how the doctors could take DNA without consent. In the article “Henrietta Lacks and the Debate Over the Ethics of Bio-Medical Research’’ by University of Washington they wrote,” Informed Consent as a doctrine came into practice in the late 1970s, nearly three decades after Henrietta Lack’s death(University of Washington).” This shows that even in those days were Henrietta Lacks did not have consent to give her cells they took it and nearly gave a damn about her. THey didn’t even know her name. Think about why they didn’t even know their name, how stupid where they at that time or lazy because they can’t write Henrietta Lacks and people write or type or even read about her every single day, they even use her and why don’t they think what happened to this woman’s family. They just disappear or just left so the people who took her cells and forgot her name can take all the money and not even give a penny to the family. In another website they typed up about the fake person the hospital mad for Henrietta Lacks. They typed then after that paragraph they explained that the real person was Henrietta Lacks. In the article”immortal cells, enduring issues” by Dale Keiger wrote,” A young lab assistant attended an autopsy at the Johns Hopkins Hospital morgue on October 4, 1951. The assistant was Mary Kubicek. The autopsy was of a woman who had died at 31 from the metastasized cervical cancer that had so ravaged her there was scarcely an organ in her body not riddled with malignancies. Kubicek had never seen a corpse before and tried to avert her gaze from the face to the hands and feet. That’s when she was startled by the deceased woman’s chipped red toenail polish. Kubicek later told writer Rebecca Skloot, “When I saw those toenails, I nearly fainted. I thought, ‘Oh jeez, she’s a real person.’”

The real person was Henrietta Lacks (http://archive.magazine.jhu.edu,  Dale Keiger).” This quote shows that they lied, and they should not get the money they get every single day. They get a fat check and never wonder to the family that made them that money. Some people would give at least a dollar for their birthday or their mothers death. In a website newsweek they talked about Henrietta Lacks how they changed her medical history. How she was a almost completely different person and how the doctors didn’t hesitate to change the name or the person. In the website www.newsweek.com an article by Allison Samuels she wrote,” The unsettling story of Henrietta Lacks begins with an everyday occurrence: a trip to the doctor’s office. The 30-year-old African-American’s 1951 diagnosis of cervical cancer would change her life, and the damaged cells taken from her body without permission would alter the course of medical history. At a time when health-care reform is a key concern for the White House and millions of Americans, Lacks’s story is a potent reminder of the injustices that were perpetrated by the health-care industry on the poor and uneducated not long ago(www.newsweek.com , Allison Samuels).” This writing shows that they did change her name and I have a feeling that they did it without hesitation. I also want to point out how they said that they were a fellow worker. Also what gave them the idea to change their name, there’s no shame in that. I also believe that the people who choose to change her name should be side and all the money they made should go to the family because changing someone cells and taking a part of them.  In conclusion i believe that the Henrietta Lacks family should get at least 15% of the money that is made, because DNA is used for good but for all they did and the time that they haven’t got a penny should get at least 15%.

This source has been made by the famous but sadly dead John Hopkins. I have admire that man and his university is great and made with honor.This source is credible because they have been uploaded many years and done amazing work over their past years. They have also been used by google and twitter and those are big companies.

This source is great because they upload a lot and it’s very reliable. I learned a lot of news or important things. This website is credible because it has been reliable to many sources such as twitter and Facebook. Also this website been used in google many times and I have read an article that was uploaded just 2 days ago.

University of of washington. “The Online Reference Guide to African American History.” | The Black Past: Remembered and Reclaimed, www.blackpast.org/.