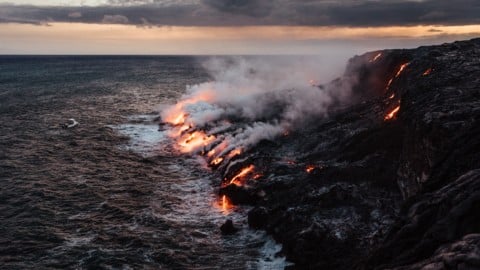 Every day since December, the Kilauea Volcano in Hawaii has spewed thousands of gallons of red-hot lava into the Pacific Ocean. The water around the lava becomes so hot—2,000 degrees Fahrenheit—that even microscopic creatures can’t survive, and ash from the eruption can kill nearby fish and birds. But that doesn’t mean the volcano, which has been erupting intermittently since 1983, is creating a marine disaster. Ecologists say eruptions like this can actually boost marine life after the lava stops flowing. When the water cools, tiny plants called phytoplankton float in and feed on the ash. They soon attract fish and other sea creatures that eat the phytoplankton, restarting the food chain. Says Loyc Vanderkluysen, an earth science professor at Drexel University in Philadelphia, “Volcanoes can pave the way for thriving new ecosystems.”

Hey Rosa,
I really found your post about the Hawaiiś Lava Waterfall important since it is something that can be spread quickly around the world. This was important since it did reach the Pacific Ocean and what if many animals died due to this fast rupturing Lava.
I would like to know more about what occurs when the Lava hits the oceans and the effects it may cause the world. Is there any way this may be stopped before it damages more land?

Hello rosa, I do like the post about the Kilauea volcano in Hawaii. even if god´s creation can be the end of any life, it does birth new ones as well. Everything has its natural positives and negatives and none of us can change that all. That´s what good to see in life.

Dear Rosa,
I was very interested in your post “Hawaiis Lava Waterfalls” because I saw that eruptions from volcanoes had a negative outcome and positive outcome to it. Such as the negative outcome is that if it erupts it could kill nearby fish and birds. The thing is though that the positive outcome when it cools down tiny plants are formed which is what allows fish to feed on which then continues on the food chain. Which means that it is very good for the ecosystem in a way and not always negative.

Dear Rosa,
I was very intrigued by your post “Hawaii’s Lava Waterfalls” because I did not know how helpful a volcano can be for the marine life. The fact that these volcanoes help the marine life even at the degrees the lava is , amazes me. Although the eruption can kill many fish and birds nearby the ash created helps the tiny plants float and feed on the ash. Which is all part of the food chain which involves us as well, because it describes how energy and nutrients move through an ecosystem.
Learning about this was something new and I am looking forward for your future posts.
-Litzy