Have Big Techs Become Too Powerful? 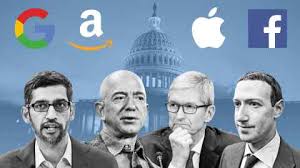 The article, “Is Big Tech Too Powerful?” explains how our lives revolve around technology and how tech companies are abusing their power. For instance, when you want to search for something up you use Google or when you want to shop for something online you might use Amazon. It’s even become a great advantage for people to connect with friends and family over social media yet lately, there’s been buzz about these big tech companies for being so dominant.

Most recently the Department of Justice (DOJ) filed a lawsuit against Google for illegally having a monopoly over internet searches. The DOJ says that Google is abusing its power when it comes to internet searches. So let’s say when you search for something on the internet your device automatically uses Google unless otherwise, you change it in your settings. Google has used its dominance to block its competitors like Microsoft and Bing. Google even pays millions to Apple to do default search engines on Apple products. On the other hand, Google argues that no one is forcing people to use Google, they use it because they want to and prefer it. It also seems like not just the DOJ has filed a lawsuit against Google, many other companies have also filed because they say Google is abusing their dominance with online ads.

Now for Amazon critics say it’s affecting online shopping. Amazon is putting other smaller businesses through struggle as they’re making it hopeless for these retailers to sell their products. Many think it will be hard for people to switch away from these companies because it’s a little late as they’ve gained so much power.

What are your thoughts? Should these big tech companies be broken apart so that they don’t hold so much power?

I am interested by your post ¨Have Big Techs Become Too Powerful?¨ Since I completely concur that the enormous innovation companies are mishandling their control. They feel like they can be the as it were ones who can succeed and they´re making the other companies who are beginning go down within the dumps. We have to be do something around these companies Misusing their control. One sentence you composed that stands out for me is ¨The DOJ says that Google is mishandling its control when it comes to web searches.¨ I concur with you since Google is misusing their control and we got to do something approximately this some time recently it gets more out of hand. Much appreciated for your composing. I see forward to seeing what you type in another since I truly delighted in perusing your post. I see forward to your future posts about similar tipics like these.

I enjoyed reading your article and thought about “have big techs become o powerful”. It Is an unknown problem to me I find it very interesting that google had a competition i did not know there were other portals. I think it is very impressive how google managed to make it successful.
one sentence that stands out to me is ” Google argues that no one is forcing people to use Google, they use it because they want to and prefer it. this is interesting to me be used I can understand how that might be true but it may not be the case. I think some people might be in the same boat as me when it comes to these portals they may not even though they are any other options.
thank you for writing I am looking forward to reading what you post next. i have found this article really interesting see you next time.

Hi, I like your post because too many this is more than just a little problem. I think that technology is a big part of everyone’s life and way of doing business. I do not think those big techs should be broken down because, in my opinion, everyone has their favorite ways of searching for something on the internet. If one thing is taken down, don’t you think the people will be even more upset? Maybe everyone wants something new or bigger or that’s in the “trend”.

I am Intrigued by your post ¨Have Big Techs Become Too Powerful?¨ Because I totally agree that the big technology companies are abusing their power. They feel like they can be the only ones who can prosper and they´re making the other companies who are starting go down in the dumps. We need to do something about these companies Mishandling their power. One sentence you wrote that stands out for me is ¨The DOJ says that Google is abusing its power when it comes to internet searches.¨ I agree with you because Google is mishandling their power and we need to do something about this before it gets more out of hand. Thanks for your writing. I look forward to seeing what you write next because I really enjoyed reading your post. I look forward to your future content.
Bryan Nunez