Harmful Effects Social Media Has on the Mental Health of Teens 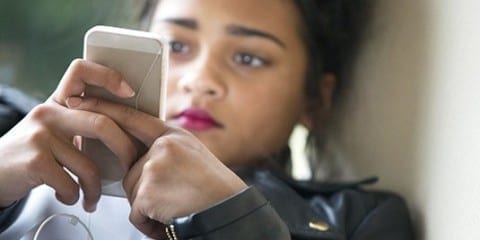 In my last blog post, I expressed the idea that social media hinders people’s ability to communicate and truly engage with others, overall lessening the power of language in human interactions. Building on this topic of social media’s negative effects, I want to discuss how the mental health of youth is becoming damaged and strongly influenced by the modern world’s overuse of technology, along with the impossible ideals and unreachable expectations that come with social media.

Social media is attractive, appealing, and entertaining to the developing teen brain because most youth desire to form friendships and relationships with others their age. Online platforms and apps like snapchat, youtube, and instagram allow teens to form these kinds of connections through their “24/7 access to a space in which they can share their thoughts, feelings and mutual interests” (Michael).

While social media provides teens with this seemingly beneficial opportunity, these online platforms can consume the lives of youth by ultimately creating more anxiety and stress. Tweens and teens “average six and nine hours” using media each day, which is tied directly to the mental health of young people (Michael). While some people are able to control the amount of time they spend on the internet, “20% of people” who have at least one social media account have the inclination to check them “at least once every three hours” so that they do not feel anxious (“Impact…”). This popular occurrence and feeling even has an official name now: social media anxiety disorder, which was reported by the Anxiety and Depression Association of America (ADAA).

From personal experience, I find it extremely hard to focus on doing homework or even simple tasks and responsibilities because I feel the need or desire to go on my phone. A part of this problem is caused by procrastination, but I think that urge to respond to snap chats or scroll through tik tok and instagram is a major factor. I know that social media has caused me to feel anxious, sad, and ironically lonely, even with a device full of people’s contacts at my fingertips.

As a teen girl, I believe that teens tend to use social media platforms for validation and reassurance of their appearance, interests, and activities, relating to their desired perception of their personality and overall self in the eyes of others. I know it is so easy for kids to feel like they have to look like those people, dress like that person, be as skinny as that girl, act the same as this boy.

Social media’s potential peer pressure can cause teens to believe they are not attractive enough, “warping their body image, and in some cases, leading to an eating disorder, such as anorexia nervosa and bulimia” (Michael). A lot of advertisements and famous influencers generally motivate people to strive for unrealistic ideals, and it genuinely can hurt people when they do not get enough likes or validating comments on their posts. I have found myself comparing the number of followers, likes, and comments I have to others, which clearly can become an unhealthy habit.

The mental state of teens can be extremely harmed by the possible destruction that social media has the ability to create. Honestly, social media can easily become exhausting, and our world would benefit from realizing the need for placing limitations and reasonable expectations for themselves when using it.

Dear Katie, I really agree with some of the points in your article, “Harmful Effects Social Media has on the Mental Health of Teens.” because when you said, “ Tweens and teens “average six and nine hours” using media each day, which is tied directly to the mental health of young people” it doesn’t make any sense to why we need a screen attatched to our face for that long. I think we should spend less time away from toxic enviorments including social media. Thank you for writing, I look forwards to what you have next!
-Sincerely Kyla

This is such a great piece. Great job! Social media has always had a large impact on the user’s life. There’s a lot of components that can make someone feel down and not feel normal. Social media contains a lot of those components.

This is an article the most people in this day and age need to read. I personally don’t use social media and could not care less about it, but I know that there are people that are attached to it completely. This article is a good wake up for people like that, because they may not realize just how bad they are hurting themselves.

I am really interested in your post because it shows the reality of today’s society. It tells how a teen can suffer. You mentioned that teens usually use social media for validation. I 100% agree with you and think that social media can be used to always look down on yourself and compare yourself to other people and always think that you need to be like them. Your post reminded me of how i used to use social media. I also fished for compliments because of how lonely and bad I felt for myself. I really look forward to reading another one of your posts in the future.

Nice piece, Katie! A comment I made on one of your classmates’ blogs applies to you, as well, so I’m going to copy and paste it, here. Before I do that, though, I want to comment on your observation that teens, today, typically use social media for validation. One question that could be the inspiration for a follow-up piece to this one is the question of what the primary purpose of social media SHOULD be. Should it be validation or should it really be for something else. If you can’t get around the fact that social media will be used for validation, then what does health validation through social media look like, and how is that different than the status quo?

From another poster’s blog:

Your commentary on the smartphone particularly raises tough questions because even though a sizable voice of experts has expressed concern about the way technology has re-wired our brains — Nicholas Carr is one of them; you may remember reading one of his pieces in our sophomore class– this doesn’t seem like a genie that’s going back in the bottle.

For instance, I recognize the distraction and anxiety that my phone and computer give me, but I’m not giving them up. They’re too convenient, and at this point, they seem integral to the way I live my life. What to do, then? how do you come up with a creative solution for a problem that demands radical change, that simultaneously makes that level of necessary change seem impossible?

I really liked the information you had and how clear you were. Social media has lessened teens view about themselves and led many to believe they are not pretty just because they don’t look like a celebrity. Online platforms are responsible for what is being fed to many teens. I liked your points.

I am interested in your writing, “Harmful Effects Social Media Has on the Mental Health of Teens” because I do believe that social media affects teens’ mental health. Social media can be very fun but sometimes you do need a break from it. One sentence that you wrote that stood out to me was “From personal experience, I find it extremely hard to focus on doing homework or even simple tasks and responsibilities because I feel the need or desire to go on my phone.” I think this is important because I can relate to this when I have homework that is due but I just keep scrolling on my phone that is hard to stop. Thanks for your writing. I look forward to seeing what you write next because this was a relatable topic.