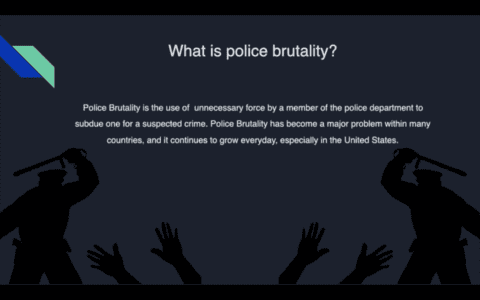 Police Brutality has been a widespread issue around the world. Reviewing trends, we are able to see that minorities are highly targeted in the United States, and are more likely to be assaulted by a member of the police department. Living in a big city and being a minority makes me passionate about this issue. It is something that is seen in the news everyday, and it is unfair. This leads to an unequal society in which people are afraid and consumed by the thought that the victims of police brutality seen on the news, in the papers, etc. could have been them.

Prior to this project, I knew much about the issue of police brutality. I have seen many cases on the news and on social media and it was clear to see that there was a correlation between most situations- the targets have been minorities. I however did not know the extent to which minorities are being targeted. I now know that African Americans are 2.5 times more likely to be shot and killed by a police officer. Though there are more caucasians within the United States, minorities are still being targeted and assaulted at a higher rate. I also knew about two groups regarding police brutality- Black Lives Matter, who are against police violence, and Blue Lives Matter- who do not believe police brutality is a problem because cops are also being killed everyday.

Police Brutality is a problem that needs to be stopped as soon as possible. Many things can be done to stop this, which is making the police department more diverse. There are more caucasian cops than any other race, and this makes it easy for police officers to assault who they do not know and who they cannot relate to. With this and many more, society would be taking a step closer to justice.