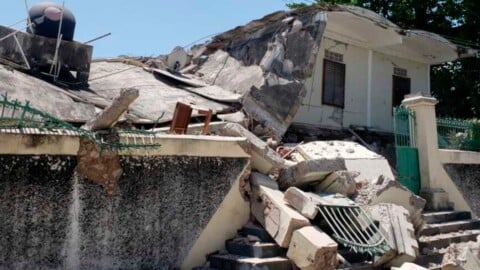 In the article “Haiti Faces Series of Natural Disasters”(McGraw-Hill) I read that Haiti was hit by a massive earthquake. It was the deadliest earthquake in more than a decade. In the early hours of Saturday morning, August 14, 2021, Haiti was devastated by a 7.2 earthquake that killed more than 2,200 people and injured 12,000 more. Thousands of buildings were demolished by the earthquake, this included schools and hospitals. A rough estimate of 53,000 houses was destroyed. As a result of the violent earthquake, the water supply was severely contaminated. Giving people shelter was extremely difficult due to covid 19. Hospitals were also destroyed by the quake and many injured Haitians had to wait for medical attention. The death count could have been much higher as compared to 2010 which had a 200,000 kill count.

Only 2 days after the earthquake, a tropical storm named Grace came in. It brought heavy rain, flash flooding, and mudslides. Even though Grace lost its power, it quickly regained it. In certain areas, there were up to 15 inches of rain! Hospitals that were left were extremely crowded with injured people. The U.S. and other teams are doing their best to support Haiti in this horrible situation.