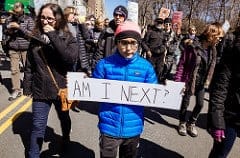 I am interested in gun rights, specifically in the US compared to the rest of the world and what this means for gun violence in the US. I read three articles on run rights, one was mostly about the statistics of gun violence in the US versus other countries, one is simply stating the pros and cons of gun control and where most of the country stands on this issue, and the last is from the perspective of a mother who has to raise her children in a world with gun violence.

After reading U.S. Gun Policy: Global Comparisons, by cfr.org, I learned that the US has roughly half of the worlds civilian owned guns, and in addition to this we have one of the highest gun related homicide rates in the world among developed nations. This article compared many other nations gun regulations to ours, showing how many of these nations have all had serious gun reform in their recent history due to gun violence issues. This has showed me how unwilling the US is to have any kind of gun reform. The rest of the world has responded to gun violence by restricting access to firearms and reforming their gun laws, meanwhile, while the US has one of the highest gun related violence rates in the world we still have yet to implement any type of gun reform.

From Gun Control Explained I learned why many people in the US are so against gun reform. Many people believe that it is violating their rights, they believe that people have the “right to arm themselves for hunting, self-defense, sport- or just because they want to”. This statement stood out to me because it made me think of the third article We’re teaching kids how to fight off an active shooter. Surely we can do better. In this article Darlena Cunha shared a story from her perspective as a mother of hearing how her daughter is being taught to defend herself against shooters at her school. Cunha says, “Look at how far we, as a nation, will go to avoid sorely needed gun control. We’re twisting ourselves in knots and forcing schools to pay for all this training to save our kids’ lives, just so we don’t have to contemplate legislation that would stop the problem at its root.” We are forcing our children to defend themselves simply because many of us value hunting, sport, and our wants above the safety of our kids.

This is such a poignant article. Today’s society is basically accepts gun violence in schools as a sad but normal occurrence. I like the quote from the mom who said rather than coming up legislation, we are teaching our kids how to defend themselves. This is an article (https://www.preventioninstitute.org/focus-areas/preventing-violence-and-reducing-injury/preventing-violence-advocacy) that I think you could use to learn more. This also reminds me of a YouTube video I saw that talked about how school gun violence is only a problem in the United States. If you could tell what specific steps are needed to stop this crisis, I will definitely come back and read more.

Lexi,
I’m glad you are talking about such a hot button issue in America’s current political environment. A lot of what I’ve come to see with this issue is that while many push for legislation to push for gun control, the true problem lies in the system itself. You talked about, “how unwilling the US is to have any kind of gun reform.” I don’t think the US is unwilling to gun reform, but organizations such as the NRA push their views on gun rights, and are able to control the political environment because of how much money they put into backing politicians. The NRA has spent over four million dollars in lobbying efforts in the current fiscal year. To me, when policy and elections become a game of money and backing rather than the voice of the people, there begins to be a problem. It’s hard for the people’s voice to be heard when politicians owe much of their success to these organizations that push the politician’s hand in a certain direction by treating to not fund their next campaign of they vote in a certain way. It would be interesting if you discussed not only the U.S.’s current state on guns, but how the political environment differs from those countries with stricter gun laws.
https://www.opensecrets.org/lobby/clientsum.php?id=D000000082&year=2017 (The NRA’s lobbying spending by year)

So, first off, whoever thinks the second amendment is for “hunting, self-defense, sport, or just because I want to” does not understand what the amendment was made for. It was made to combat a tyrannical government. In a tyrannical nation, the gov’t owns all the guns, that amendment was made so that doesn’t happen. Secondly, gun control is not “sorely needed”, in fact it really isn’t needed at all. If you look at Australia, they had a mandatory buy-back of all firearms in the country, and yes the gun violence went down. However, violent crime went straight up since there were no firearms. But that’s a different country. Let’s look at Chicago. Chicago has the most strict gun laws in the entirety of the US, and yet their gun homicides are very high. High 2000s-3000s. If you look at overall gun deaths in the US per-year, you’ll get a number that is around 33,000. However, this number is misleading because it includes gang violence and suicide. So, if you take those out, you’ll get a number closer to 8-9000 per-year. Which, yes, is still not ideal, but nothing is ideal with the power of free will that we all attain. If you look at FBI Crime Statistics, you are more likely to be stabbed to death than being killed by any kind of gun that isn’t a handgun. You’re more likely to beaten to death by a blunt object, punched to death, yet we don’t lobby to ban hands and chairs, do we? What about cars? Car accidents are pretty high, why don’t we ban cars? We already tried banning alcohol, that didn’t work out so well. Trying to get rid of firearms will only create more of a problem. All it will do is disarm law-abiding citizens. It makes it so they cannot defend themselves. The second amendment exists for a reason, and “shall not be infringed” was written down for a reason.

Although it should be surprising that the US has half of the worlds owned guns, and one of the highest gun related homicide rates in the world, it is not that surprising considering all the events that have happened recently. I also like that you mentioned that other nations have responded to gun violence by reforming gun laws, because this should influence the US to do the same. I wonder however, if anything similar to the mass shootings in the US, has happened in these other places and that’s why they changed their gun laws. Also, it’s good to hear the perspective from people who have been in schools shootings. Here is a link of someone’s story, https://www.nytimes.com/2018/10/11/opinion/letters/activism-emma-gonzalez.html
I have read many similar articles to you and I have learned similar facts about gun control in the US. I would like what you think of the article from the people involved in school shootings.

I thought where you said “the US has roughly half of the worlds civilian owned guns, and in addition to this we have one of the highest gun related homicide rates in the world among developed nations.” was a really interesting statistic because I think guns are so normalized in our society but it opens it up to a new perspective when you look at it in comparison to other countries. I am curious about some of the ways that other countries have dealt with the gun control issue. Here is a link to an article by Time magazine which proposes some ways we can reduce gun violence that I think are relevant to your argument(http://time.com/5209901/gun-violence-america-reduction). Thank you for sharing this article I look forward to reading what you have to say about this topic in the future.

I also find the US’s gun laws interesting compared to other countries. I think that if the US banned some types of guns (the ones most common in shootings) then that would create a positive impact.

Which firearms would that include Matt?