Gun Control in the 2016 Election

Home Gun Control in the 2016 Election 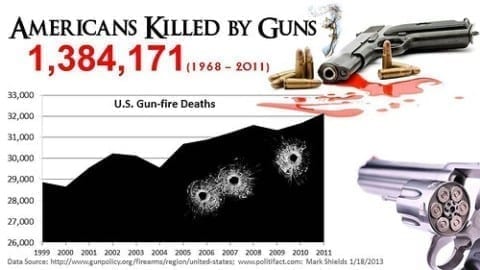 One of the biggest debates in our country today is over the issue of gun control. It is a major issue in our election right now as well—Hillary Clinton wants to enforce stricter guidelines on gun use in order to decrease the amount of gun violence in our country. Donald Trump, on the other hand, accuses her of wanting to “take away all of our guns,” and therefore our Second Amendment right.

There is no doubt that the gun violence in our country is extensive, so the questions comes down to what we value more: freedom or security. Guns have been the leading cause of death in both homicide and suicide, and firearms were the 12th leading cause of all deaths (1.3%). A study by the American Journal of Public Health found that “legal purchase of handguns appear to be associated with a long-lasting increased risk of violent death. Implementing federal background checks could reduce firearm death by a projected 59.6% and gun identification requirements could reduce deaths by a projected 82.5%. This is what Hillary proposes, as well as a ban on high-capacity magazines because they can often turn murders into mass murders, which happen on nearly a far too often in the US.

One argument for less gun control is that “the only way to stop a bad guy with a gun is a good guy with a gun.” In this argument, guns would be used as self defense, but no mass shooting has ever been stopped by an armed civilian. Pro-gun activist say that we need guns to protect ourselves from foreign invaders, such as ISIS. But again, if our country is attacked by ISIS it will likely not be by combatants, rather a nuclear bomb or another form of terrorism, and guns will have no effect at all. As with ISIS related terrorist attacks that have already occurred, no civilian has been able to prevent it, and they may even cause more danger.

The only reason that this is a real issue is because of the second amendment, which says “the right of citizens to keep and bear arms shall not be infringed.” But Hillary does not propose to take away guns at all, only make restrictions that will protect all our citizens and prevent mass shootings. She really only advocates common sense gun laws, such as background checks for all gun buyers, even at private shows, and the ban of assault weapons. Even many people who own guns advocate for common sense gun laws, and it seems that most who oppose it are against the government infringing on their freedom in any way.