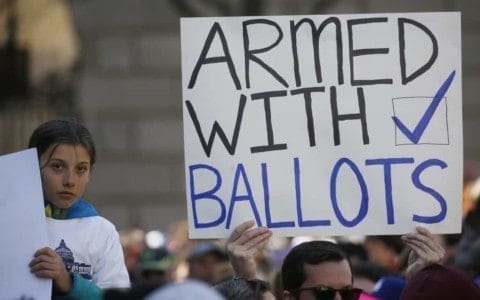 Branigan, this is a very interesting article. I appreciate how you mentioned both perspectives on the issue. You brought up an interesting point when you discussed how politicians now experience pressure to pick a side. I think that most voters expect candidates to speak up about this issue because of the expansive impact it has on our lives. I think you could go more in depth on the reasons why people do and do not support gun control. Here is an article that outlays some of the different interpretations of the Second Amendment that may help you do that. https://www.theguardian.com/us-news/2017/oct/05/second-amendment-right-to-bear-arms-meaning-history
Overall, very nice job!

Branigan, you made several clear points in this article, and I’m glad that people are taking notice of this important issue. I like how you took the stance of both sides and showed very little bias over the course of your entire rhetoric. Here’s a link that might help you in your future research: https://www.nytimes.com/topic/subject/guns-and-gun-control

This article was very well written. I enjoyed how you addressed such an on occurring and controversial issue happening still today as well as something in the eye of the public leaving many conflicted. I think adding statistics and/or studies to this would help further provide information for each apposing side and give a further understanding as to why they feel that way. Also maybe if you added the effects of gun violence to those who have been victim through school shootings for example. With that slight change it would be easier for me as the reader as well as others reading, to understand each side and help further educate in making our own personal opinion. https://tcf.org/content/commentary/gun-violence-puts-education-under-fire-stifling-achievement/?gclid=EAIaIQobChMIiLbbu_Cl3gIVQmx-Ch1W7Q6REAAYAiAAEgJQnvD_BwE

In your second paragraph, you mention that the gun control issue is forcing candidates to essentially pick a side. You have good analyzation but it would help make your argument stronger if you were to add evidence to pair with your analysis. It’s an interesting topic and definitely plays a big role in politics today. The pro-gun control website (https://gun-control.procon.org/) helps to define gun control laws in an objective way, which can help to bring some insight to this. Reading your writing has reminded me to be aware that politics is complicated.