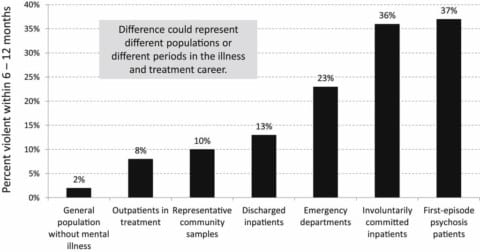 After the events of the Florida Shooting, I wanted to do some research into how mental health and shootings such as these are correlated. Even the president commented on how those with mental health issues were to blame. According to statistics, there have been 18 school shootings so far this year, that’s about one each day. These shootings have become a part of society, and yet they still happen. Is mental health all that’s behind this? Or is it he lack of gun control?

It is seen that “2.9% of persons with serious mental illness alone committed violent acts in a year, compared with 0.8% of people with no mental disorders or substance abuse—a statistically significant relative risk, despite a low absolute risk of violence in people with serious mental illness. Those with co-occurring substance use disorder and serious mental illness had a higher rate of violence, 10.0%, but this still meant that a clinician would be wrong nine times of 10 with a blanket prediction that someone will commit a violent act merely because they have a combination of, for example, depression and alcohol use disorder”. So it seems that mental health does increase the chances of violent acts, but how easy is it for someone with mental health disorders to get a gun? In the state of Florida, one can get a gun in 15 minutes, as long as you are of legal age. If one can get a gun with no background checks, then how can someone who is mentally disabled be held accountable for being allowed to get guns?

The shooter in Florida is a 19-year-old man. That’s one year older than a senior in high school. There was clear evidence that the shooter was in poor mental health before the shooting, and yet, it seems like there was no help given to him. However, in Japan, where gun ownership by citizens is illegal, there are no (or very little) shootings. Why has the US not changed its policy? Is it the heavy slew of Republicans that refuse to act, or is it the Government? How can people help? What can we do as a society to get help, other than posting on facebook or social media about it?

Hi Lexi,
I thought your post was great. I agree that mental health and gun control are both substantially important. I believe that although it is prominent to take care of people’s mental health before they buy guns, that takes time. It takes way less time to have at least one more rule for our country’s gun control, so people who have mental health issues cant can their hands on guns in the first place. Some say that it is the people who kill people, not guns, but the truth is they go hand in hand. I appreciated your post; if you want to read more about this, here is an article you might find interesting: https://www.cnn.com/2018/02/15/politics/trump-gun-legislation-mental-health/index.html

Hi Lexi,
What an important topic. The statistics you provided were intriguing, and I agree with you when you say “how can someone who is mentally disabled be held accountable for being allowed to get guns”. Change is hard and it must be fought for and this is definitely a change that needs to be made. Mass shootings are unacceptable. In response to your question, ” How can people help?”, I found a resource thats lists 30 actions you can do to help gun reform: http://www.30guncontrolactionsyoucantakenow.com/take-action/. Thank you for writing about such an important and devastating issue.

I commend you for tackling this topic, especially as it is one that is so widely-discussed and controversial in our country. As a citizen who can only offer my take, I, of course, cannot suggest an all-encompassing solution to such a complex problem, yet I think it’s important for our generation to continue discussing it. First of all, it is important to note that there is a deal of controversy over the statistic you mention above regarding 18 school shootings in this year. In an article from the Washington Post, it was determined that only five of those shootings took place during school hours and caused injury. Obviously, any number of shootings above zero is intolerable, but I think it is important to be clear on these types of statistics.

Too often, people attempt to categorize an issue such as gun control into absolute categories, in other words, you’re for it or you’re against it. This is an irresponsible simplification in my opinion. While my own views of gun ownership are considerably negative, I respect the right of those who exercise the second amendment to own guns- within reason. I think it illogical for anyone to argue against strengthening background checks for those attempting to purchase a gun, especially when it is blatantly obvious that our background checks now are insufficient in the wake of the carnage resulting from public shootings in this country. At the same time, we have to ask ourselves a moral question: to what degree is it reasonable for citizens to own guns? For example, there is a clear difference between owning a handgun for self-defense and being able to purchase an AR-15 assault rifle, whose sole purpose is to eliminate life as quickly as possible. That logic is not political, it’s not partisan. It’s common sense.

Finally, we have an obligation to each other and our posterity to support policy now that will make our country safer. That requires knowing who you’re voting for, knowing which candidates are backed by organizations like the NRA. And, regardless of legislation, we cannot allow ourselves to become numb to events such as those in Florida. Even with shootings in 170 different schools since Columbine in 1999, we cannot allow this to become the norm. We can’t extend thoughts and prayers only to let the issue slip by without the action to fight it. Complacency is unacceptable, and our generation needs to be the one to end it.
This is almost certainly a longer comment than anything you anticipated but I hope that it may continue a greater discussion on this topic and sponsor your continued interest in it.