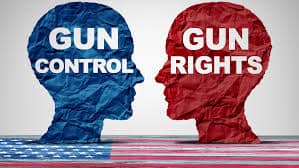 The next topic is gun control, because of how controversial it has been. Gun control has been a recent topic due to the increase in mass shootings over the last couple of years. The benefits of stricter gun control are public safety, the potential to lessen mass shooting, and less violence. Gun control is a hard topic to push because of organizations like the NRA and the support that they have. Even though there are pros that come with this topic there are also cons.

On the other hand, gun use has advantages that need to be considered. Implementing more gun control could cause more problems than already exist. Problems that could arise include creation of a black market selling guns if they could not be bought legally, fewer guns isn’t going to change what a person is going to do, and there are over five million members that are a part of the NRA. Gun control comes with two sides, so making a direct decision is hard because it impacts both sides of gun rights and gun control.

Hey Luke I would have to agree that it is hard to make any decisions when talking about a topic as controversial as gun control, so i found this article to maybe get you to think about it on both sides of the playing field. here the link https://gun-control.procon.org/

Hi, Luke,
I completely agree that gun control is a severe, controversial issue in the United States. We must do everything to prevent any tragedy happen. To reduce the risks related to guns, we should address the contributors to gun violence and the prevention infrastructure necessary to ensure effectiveness. Here is the link: https://www.preventioninstitute.org/focus-areas/preventing-violence-and-reducing-injury/preventing-violence-advocacy.

Hi Luke,
I like your post very much. Gun control is indeed a problem. If guns are free, it may pose a threat to the campus, and it may be impossible to kill someone because of anger.
This link may be helpful to you https://www.justfacts.com/guncontrol.asp

Hello Luke,
I agree with gun control being such a controversial topic and issue that has arisen in modern society. Guns have become an issue relating to school shootings due to the vast number increase. The only way to eliminate guns is to ban them or put stricter laws on what we can to do make it safer for all. Here is an article regarding it all: https://reason.com/2019/11/20/new-gun-control-bill-encourages-financial-institutions-to-report-suspicious-firearm-transactions/