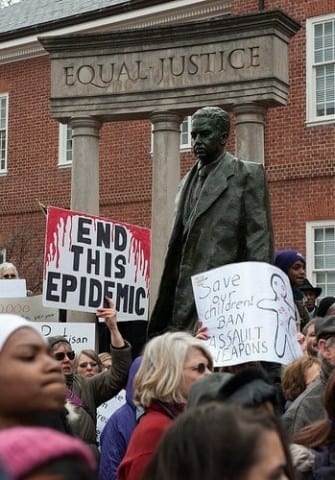 Gun control is a huge topic in the upcoming debate because of the significant increase in police brutality, terrorist acts, and pure gun related attacks not only in the United States but in the World.  This is a topic that needs to be discussed, and something needs to change because the use of guns in a horrible way is increasing and nothing seems to be changing.  In the U.S. especially something needs to change.  ” The United States has 88.8 guns per 100 people, or about 270,000,000 guns, which is the highest total and per capita number in the world.”  These statistics are just showing how guns are everywhere around us and we need to teach and be taught on how and when to properly use them.

The Second Amendment is very often brought up when discussing gun control.  There are two different sides taken on this amendment.  One being, “Proponents of more gun control laws state that the Second Amendment was intended for militias; that gun violence would be reduced; that gun restrictions have always existed; and that a majority of Americans, including gun owners, support new gun restrictions.”  Then the opponents basically say that this amendment simply protects an individuals rights to own guns, and this being they shouldn’t loose this right.  I do believe people have a right to own their guns, however I do  think there are people who shouldn’t be able to won guns.  This is a privilege and should be respected as such.  No everyone is mentally, physically, or emotionally stable enough to own a gun and therefore should not have access to one.  It’s the rules and laws to obtaining guns should be dramatically changed, as to only sell guns to people who are properly licensed, trained, and able.  This rising epidemic needs to be detained.

I agree, I think those who are mentally challenged should not own firearms. I also think there should be background checks for the sales of bullets, but I also realize that if we take the firearms form the people, crime rates will increase by a lot like they did during the Assault Weapons Ban Act. I feel the gun violence has been prioritized by the media but I don’t think we really have as much violence in the USA as people believe. We see stories about crazed gunmen but we don’t look at those that stop that crazed gunman (or stabber). Mostly it is good guys with guns stopping bad guys.