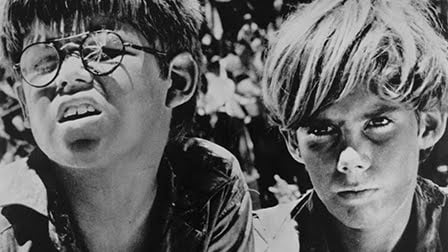 Loss of Innocence is a concept that is commonly misunderstood. It is not merely just a physical change but a mental change as well. A perfect example of loss of innocence is in the novel Lord of The Flies. Jack, a key character, performed rituals that caused the rest of the boys to unleash human savagery. The boys lost every ounce of innocence they once held as young boys. The boys began to murder pig after pig, feeling zero remorse. Golding, the author takes loss of innocence to a far extent but that does not mean the idea of loss of innocence is not found in everyday reality. Outside of physical maturity, the loss of a child’s innocence is a part of child development because of gain of knowledge and parental pressure.

A developing child often gains knowledge creating a loss of innocence. The knowledge gained from a child often comes from the influence and actions of parents. Related to the knowledge of a child, If parents ever want to combat the loss of childhood innocence, they need to be mindful of what their children are exposed to. They need to focus on nurturing their children instead of being too concerned with success and lose sight of what is important.” (Jones)  Demonstrating that a parent who is too concerned with their child’s success causes the child to gain too much insight on more mature topics and principles that a young child should not regard. Parents try to introduce their child into the adult world too fast. Just like in Lord of the Flies the boys are thrown into a completely different life in trying to live like adults. They gain a sense of knowledge they weren’t quite ready to know revealing the loss of innocence. Young children gaining knowledge is often from the example their parents set in their lives. Parents believe, “… things like stimulation, knowledge and wisdom are key to a successful life as an adult but everything should be done in moderation” (Jones) alluding to the idea that too much knowledge can cause a child to be too aware. Exposing a child to too much information at a young age can cause the child to take that information to other environments, for example school.

Innocence of a child is lost due to parental pressure. It is commonly believed that in a child’s life they are constantly pressured by their parents. Expectations of a parent can become unbearable, for example, “You wanting your child to be the centre of attention in your social circle for his achievements is your wish based on your perception of what a perfect child should be. Don’t make your children suffer to live up to your expectations” (Tammy). Children are pressured at a young age to be something they are not. This pressure takes control of the child’s life and causes them to miss out on a childhood that they should be living. They lose their innocence that they clearly should have at such a young age. Children are pressured to perform well, “…and the pressure to perform at an age where he’s just supposed to be a playful carefree kid, away from any kind of stress. We’re making little kids experience adult emotions and then wondering where their innocence has disappeared” (Tammy). It is important for children to just be kids for a while because once entering adulthood, being a child is gone. The idea of loss of innocence has been seen at early ages annually, it is heartbreaking to see the young children stripped of childhood things. It is due to parents, the pressure for their children to become an adult too fast really does alter the child’s innocence.

It’s important to take a step back and look at where society is heading. The path right now does not look like it has a happy ending. Children are becoming adults at an earlier and earlier age and soon child innocence will be terminated. Parents should think next time before they pressure their child into success or teach their children adulthood too early in age.

Mehta, Vaibhav. “Loss of Childhood Innocence – Are We Pressurizing Our Children Too Much?” The Wandering Vegetable, 7 Aug. 2020, https://thewanderingvegetable.com/loss-of-childhood-innocence/.