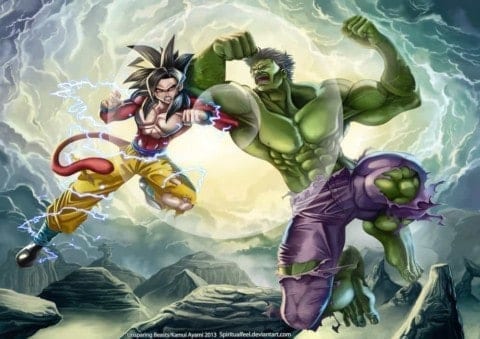 This is a fantasy/fiction story.

After Goku defeated Spiderman Hulk wanted to avenge him. Hulk jumped all the way to Goku’s home. That’s where Goku, Gohan and Goten lived. Goku went out when he heard Boom Crash Kablammo!  Hulk came exploding cars snapping trees like pencils. Just as Hulk saw Goku he through the tree like a spear. Goku deflected it by spinning in the air and kicking it back. He kicked it so hard it looked like a comet coming down on Fire. It was faster than the speed of light.

Hulk could not stop it in time. Crack!   Hulks ribs cracked, but he regenerated. He took it like nothing. Hulk got so mad he upper cut Goku up into the air. Hulk jumped up and punched him back down. Kapow! Boom! Hulk punched him so hard he created a crater. Goku got back up and look hurt, but he wasn’t. He got up  so mad his powers exploded. He exploded with rage and made a crater. He turned into Super Saiyan Legendary God Rainbow One Million. His hair turned a bright, wiggled and mixed rainbow color. Goku had no pupils. His eyes blue fire. He flicked Hulk back like paper. Goku went past him so fast he was a blurr. He was faster than the Flash and Quicksilver together. When he got to Hulk, He punched him down too earth.

Hulk had disappeared in the dust from that hit. That’s when Boom! Goku had stopped one of Hulk’s punches that created a big wave. Hulk kicked him back and Hulk Hulked smashed him. A sharp rocked popped out and cut Goku’s shirt. Goku took off his shirt. Hulk cracked neck and knuckles. Goku made his first move. He teleported and kicked Hulk on his back. Goku kicked him so hard you could see his leg on the other side. Hulk got up so raged you could see his veins pop out. Hulk grabbed Goku punched punched and threw him on the ground punched him 40 times. He grabbed Goku and smashed him side to side and smashed him on the ground. Then threw a boulder on top.

Goku blasted his way out. Goku charged into Hulk taking him down. Goku punched him a lot of times sharing the pain with him. Hulk got blasted backwards and fell, but Hulk still got up. Hulk grabbed a bolder and threw it at Goku. Goku punched it into a million peices. Only in one punch.Hulk smacked his hands so hard it made a big sound wave, but Goku just stood there. Said “ Time to finish this”. Goku and Hulk punched hand to hand getting Hulk off guard. Goku exploded with power once more Goku charged into Hulk. He punched him, upper cut him, broken ribs. Goku punched him and his hand went through Hulk. Goku grabbed Hulk landing him Hulk back on his knee. Crack! Broken back. Goku blasted him on fire breaking every bone……… but Hulk still got up. ¨Impossible he must of been regenerating all this time¨. Goku was angry. He focused on Hulk and blasted Hulk some many times he was on his knees. That’s when Goku made his final blast……. THE SPIRIT BOMB! ¨AAAAAAAAA¨! Goku was preparing for it. That’s when SSSSHHHHH OOOOO BOOM! That explosion was two times bigger than a nuclear bomb. HUlk was down Goku had won the battle.

sweet story! I really enjoyed reading it! I think Hulk would beat Goku in a real fight though. Who do you think would win in a battle, the power rangers or ninja turtles?

This fictional story was great! keep it up with the details!

this is wonderful, you really grab my attention and make me want to get more hooked on animation, I think that means you are a great writer

Nice story. The story is very grabbing and I like how you put lots of detail.