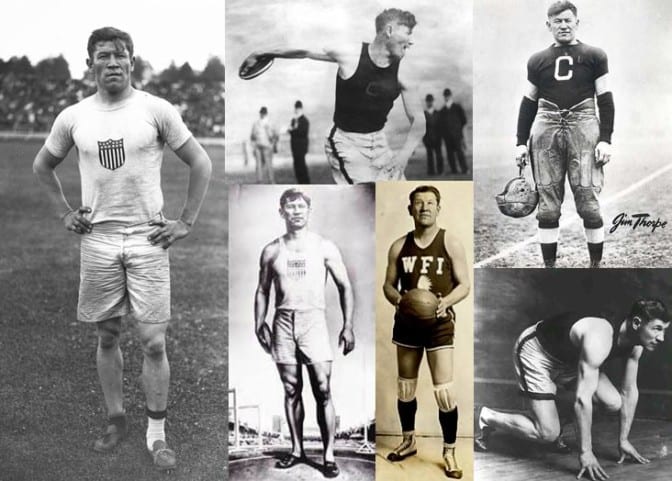 Native American hero, Jim Thorpe overcame discrimination to win two Olympic gold medals in 1912. Thorpe was acknowledged as a hero by a country that denied him citizenship though. As a Native American he was denied citizenship by the U.S government and attended schools designed to strip Native children and teens of their culture. At the school, Carlisle School, he was separated from his family and stripped of their cultures, languages and religions. Fighting this adversity, he would later on show what an Indian Man can do.

In the 1912 season, there was a game against the Army in which Thorpe attend. Behind Thorpe’s stellar rushing, Carlisle crushed Army 27-6. Thorpe not only played football and ran on the track, he would proceed to play baseball in the summers of 1909 and 1910. There he would shine leading his athletic abilities all the way into playing Major League Baseball. Thorpe then became the first pro football star and the first president of the league that would later on become the NFL.

Based on Thorpe’s backstory, would you consider him the GOAT on the field, or off of it?

I would agree that he should be in the conversation of the most influential and progressive/trendsetting athlete, however, I would say the GOAT conversation is obviously meant for those who were/are ACTUALLY the greatest players of all time. Yes, while you did mention the fact that he could be considered the GOAT on OR off the field, I do not think he would necessarily be considered either. Because you must also consider Jackie Robinson or Moses Fleetwood Walker in that same conversation. I agree that Jim Thorpe was absolutely amazing at his many crafts and that he is absolutely an important figure in American Civil Rights, he just isn’t the GOAT of any particular sport.