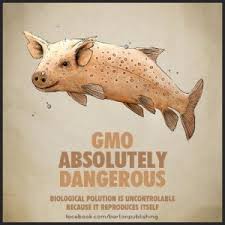 In 1935, that was when GMO was started or discovered. In 1994 is when GMO foods were getting sold in stores. GMO is a laboratory process where genes from a DNA is forced into genes of an unrelated plant or animal. There are hundreds of foods that are genetically modified such as salad dressing, cereal, frozen yogurt, vanilla peanut butter, pasta, alcohol, etc. Almost 98% of Canadian grown Canola is genetically engineered, many people don’t the ,any effects it has on someone’s life.  Nonetheless, many of these foods are sold at grocery stores, and to a shopper, he/she wouldn’t pay attention to what they’re grabbing. The pros of eating GMO foods is resistance to insects, tolerant to herbicides, tolerance for heat, cold and drought, and crop yield. But, the cons are food allergies, organism in the ecosystems can be harmed, has bacteria and viruses, and it can emerge new diseases. The environmental impacts GMO’s would have is that “By year 2050, there will be 9.5 billion people living on this planet. This means that in less than 50 years, world population is expected to increase by 3 billion. Feeding these people will mean massive changes in the production, distribution, and stability of food products.” according to the ISAAA. Between 2008 and 2012 the cost of producing GMO products rounds up to 136 million.

These are all useful sources because not only does some of these use other sources for their information but it’s also very accurate. Many of these sites go right to the point and gives the audience the information they will need. Also, these websites makes the reader think about the foods they are digesting. With the cons provided me, myself would think twice about what I am eating. These sources are different from other because the information provided is top notch.

The sources fit in with my research because my main point is to stop GMO in foods. It’s put too many people’s bodies in risk, and it’s a waste of money because there are so many farms that can grow crops organically. All of these sources were very useful to me. It helps shape my argument due to the information given. I can use these sources in my senior project by giving the audience a reaction, and informing them to what they are eating on a daily basis. It makes me think differently I strongly believe that GMO is very dangerous, as far as bodily harm.

I think that this essay is focusing too much upon what may be bad. As far as I see, there is no quantifiable evidence that says that GMOs are specifically bad. They aren’t necessarily less nutritious, as Golden Rice has allowed many people to have a healthier alternative to what they could eat. (https://en.wikipedia.org/wiki/Golden_rice) Another interesting part of the argument, which I feel is though you addressed, is the speculative nature of science related to GMOs. Humans have effected wildlife around us ever since we started to select what plants we want to eat and spread the seeds of. GMOs are just a furthering of this idea in a new, more specific direction. You have proper warrant to be scared of GMOs, but I think that benefits, in some cases, outweigh potential harms.