Home Global Warming Has Been Proven. Why Has So Little Been Done, and What is Being Done to Correct it Now? 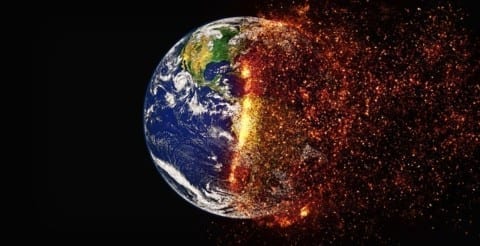 For over 30 years now, science has been proving global warming, and it’s negative effects on the human race. Even with organizations such as NASA bringing awareness to the issue, (https://climate.nasa.gov/evidence/) , there are still people who believe that global warming is a hoax, this fact is only worsened when you take into account that some of these people are leaders of the world.

If political leaders in the world aren’t attempting to raise awareness and plan for the future effects of climate change then who is? Over recent weeks one young climate activist, Greta Thunberg, has been getting a lot of publicity for her work against the climate crisis. https://www.ted.com/speakers/greta_thunberg She has created her own movement called “Fridays for the Future”, which has gained traction, especially amongst her own generation. Within her recent speeches, Thunberg has called world leaders to do something about the climate crisis, so that her generation is not left to clean up the mess. With over 100,000 children joining her, Thunberg is one of the major players in fixing the climate crisis, however, it is exactly the opposite of what she wants. She wishes for the generation already in power to fund new and innovative ways of controlling human waste and carbon footprints, but lately, it’s been hard to find places more focused on climate than the economy.

With many young activists like Thunberg and her Fridays for future movement, it is hard to believe that political leaders are still hesitant to act on climate change. Many articles bring different perspectives on why this might be. Some articles, https://www.usatoday.com/story/news/2019/09/23/greta-thunberg-tells-un-summit-youth-not-forgive-climate-inaction/2421335001/  theorize that this is because of the profit that big corporations, politicians, and government can make by exploiting the environment in ways such as drilling for oil or cutting down trees. They bring forth an idea that certain politicians can’t see a world in profiting from employing people to disarm the climate crisis.

Other articles https://www.vox.com/first-person/2017/7/14/15959968/climate-change-teenager talk about how modern-day politicians might be turning away from the problem due to an age factor. The article brings up an argument about how the older generation will not be alive to see any real impacts of the climate crisis.  Because of this age factor, the authors offer an idea that if a problem does not directly impact the political leaders, they won’t care about it nearly as much as any problems in which impacts are being seen today. Even though we are beginning to see impacts of climate change now because political leaders will not be alive to see devastating results, they might not care as much, and instead, wish to leave the problem for generations who will be impacted.

With the science and facts to prove climate change is happening, and without current political leaders doing little to nothing about the climate crisis, it is time for people like Greta Thunberg and Tom Steyer to take center stage and work for the betterment of our world’s sustainability. There are many different reasons and factors for why current world leaders are not working to solve the climate crisis, but more importantly, there are people who want to work towards a better future. Now is their time. Now is the time for a positive change, not only for those living now but for the future generations of the world.

With climate change quickly moving onto the radar of younger generations, some politicians have taken notice. New candidates, who wish to be political leaders recognize that climate change will sooner or later affect everyone, and because of this hope to replace modern-day political leaders and their outdated ideas on climate change. One candidate named Tom Steyer is an avid climate activist and wants to do what he can to save the climate now and possibly hundreds of lives later. He is not the only candidate focused on positive climate change, however, he is one that has an outline ready to go if he gets elected to the presidency in 2020. https://www.tomsteyer.com/climate-justice/ In his past the candidate has worked for climate justice and continues to do so today, the issue is personal for him because his house and many personal belongings were destroyed in a California wildfire. Since then he’s helped make oil companies pay for air cleaning technology advancements, and big tobacco was made to pay for hospital bills of people with lung cancer. Tom says if elected he will declare the climate crisis what is and work profusely to solve it. He wants to provide clean air and water for every citizen as well as create a regenerative economy.  He has many plans within his climate justice, all of which would be amazing to see really put into action. He not only wants to fix the climate crisis in America but wants to help solve it all over the world, based on the facts that NASA and Greta Thunberg have brought forward I believe it is time for someone like Tom Steyer to take office and truly help to save the world that we’re living in, not for selfish reasons but for the sustainability of future generations. Tom Steyer wants to hold previous and current world leaders accountable for their role in the climate crisis but beyond this he wants them to help advance the technologies and political advancements it will take in order to save our world.

Your argument is very well put and I agree with it completely. Even now as some politicians back people like Greta Thunberg and Tom Steyer, we have to wait and see if any real changes happen, or if it is once again just talk with no action. You also brought up a good point with the short-sightedness of politicians and humans as a whole. We often ignore results that will come after we are gone, ignoring that it will impact our children and future generations.

Hi Addison, I completely agree with you, it makes me happy to see young people seeking action. The internet has given so many people who previously had practically no voice, the opportunity to share their ideas and provoke people and politicians.

I absolutely agree with your opinion that climate change cannot be ignored and leaders of nations, developing or developed, must be concerned with the consequences of a warming earth. Sadly, I don’t think many people will start to care or devote resources to reversing climate change until it impacts them in “their own backyard.”