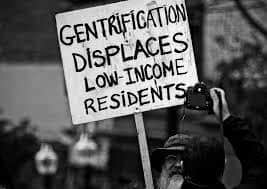 When you hear the word “gentrification” what do you think? Housing? Change? Loss? There are many ways to say what gentrification is. Gentrification is when newcomers erase and displace the history and homes of locals. Most often occurs when wealthy newcomers displace poor locals . Through interviews and articles I found out the truth about gentrification (the numbers and maps) and what the Oakland community believes about the gentrification that is going on right now.

First it is important to understand the facts about gentrification. As many people know, Oakland housing rates have risen and taken a lot from a collection of families who used to live in the communities that have already been gentrified. When I looked at a map on Governing.com I saw that there was a huge change in the gentrification rates since the 2000’s. The article stated, “Gentrification remains rare nationally. It did, however, greatly accelerate in many cities over the past decade”(Governing.com). This notes that gentrification was never this atrocious in the past that the change had just came all of a sudden. Also this notes that in the 2000’s gentrification wasn’t as big of a problem but, now it has become a more challenging issue to handle and it makes me question why has gentrification rates risen so much over the past years? Additionally, in a article I read by KQED news I read that gentrification rates has caused people who make less than 30,000 to lose their houses. KQED News stated, “In Oakland, 14.6 percent of households make less than $30,000, so we’d expect about 14.6 percent of people in that income level to leave the city. Between 2010 and 2014, Trulia found 28 percent of those leaving Oakland made less than $30,000. That’s nearly double what we would expect, and confirms that low-income people are leaving the city at disproportionately high rates”(KQED News). This points out that Oakland is being changed by gentrification because a collection of the population that live here make less than $30,000 so that’s why so many people have been kicked out of their houses. This also points out that because so many people get paid less than $30,000 communities continue to decrease at a fast rate.

Maps are also teaching the community about gentrification and which housing units are experiencing high amounts of gentrification or are seen as possible units for gentrification. The article and map illustrate, “Oakland neighborhoods that are experiencing ‘advanced gentrification,’ according to the study, include Lower Bottoms, Old Oakland, and Northgate/Koreatown” (East Bay Express). This reports that gentrification is affecting Oakland because this is saying they are trying to make places that most people can afford a place for only people with more money. Also it’s slightly 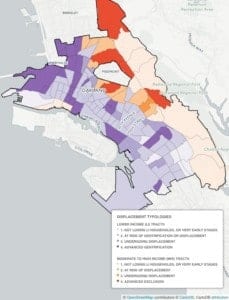 saying that the most common place in Oakland they are changing is the places with lower class populations which I find highly wrong. If  they were there first why do newcomers believe it’s right to just change it and renovate it.

To get more insight on gentrification in Oakland I interviewed some Oakland community members to hear their personal beliefs. In one of my interviews I interviewed a woman by the name of Jennifer Griffin and she explicitly explained to me her opinion on Oakland gentrification and how it has affected Oakland. She talked to me about how 55th and Wadean population  has been decreasing since the 1990’s and that a ton of people that have had to move in and out of the houses. She also explained to me how all the people who move there seem to have the money to change houses that has been the same from years 1920’s to 2015 and she thinks it’s crazy that there are still some houses that are the same that haven’t been remodeled by anyone(Griffin). This emphasizes Oakland is being changed by gentrification because no one is taking into consideration that those houses could have held something personal to the people who had to move out but because the new movers wanted the house they had to renew them and make them meet their standards. This also shows me that gentrification has been changing Oakland for a while because when Jennifer told me she felt like that has caused the most change because she can’t even remember what her community looked like before and she feels that it is to hard for her to see because she feels like they are taking away what it meant to live in on 55th. Moreover, I interviewed another Oakland community member named Shann Watson about him experiencing Oakland gentrification. He explained to me how one day out of nowhere his landlord told his mom that they would have to move and that he was pretty shocked when he heard the news because he has been in that house since he was 6. He also explained to me how just out of nowhere there were people who came to his house who wanted to buy the house and  they were discussing about what they wanted to do to  change the house. This addresses that gentrification is changing Oakland because with Watson telling me that he was told he was going to have to move because someone else’s needs had to be met it’s saying when places are gentrified they don’t care who you are they are just worried about what their buyers want. This also shows me that gentrifiers just want to change communities that they don’t know or to them seem like less of something.

Allen-Price , Olivia . “How Many People Are Being Displaced By Gentrification In Oakland.” KQED News , Olivia Allen-Price, 9 Feb. 2017, ww2.kqed.org/news/2017/02/09/how-many-are-being-displaced-by-gentrification-in-oakland/.

This article talked about the most commonly spoken about effect of gentrification.KQED news explained that Oakland has 14.6 percent of households make less than $30,000 so they end up having to leave their community and between the years of 2010 and 2014 there has been 28 percent of people leaving because they made less than 30,000. Which was pretty horrible because the people lost their houses due to money issues.

While looking at this map I saw that gentrification was pretty atrocious during those times and it was more likely for many of people to lose their houses. Also I saw that the whole bay area had to either deal with exclusion or gentrification.

Governing.com Maps are showing me the amount of places that were gentrified in Oakland in the 2000’s it also explains to me how they determined the places in Oakland/ Bay Area on what places they believed were eligible to be gentrified.

I spoke to Shann Watson about his experience with gentrification and he explained to me how he is going through that at this very moment since last year in November. We also talked about how he feel towards gentrification and he said, ” I feel like it’s taking everything away from me. Like the things I had growing up and actually enjoyed”(Watson). Shann Watson is a 8th grader at Montera Middle School.