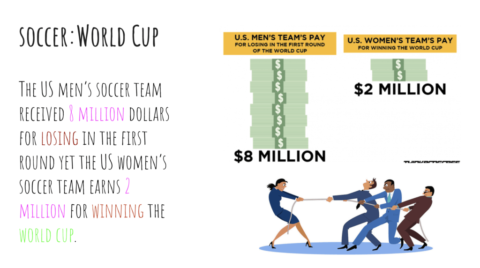 In the world of professional sports the inequality between male and female is astonishing especially when you take a look at the difference in salaries. Since the beginning of time males have always been the one who were depended. The Kings and Monarchs position of different societies filled by men.

In all sports across the board male athletes are paid significantly more than women. In an attempt to close the major gap many female athletes play in overseas leagues during their offseason in order to earn more money. They can typically earn 15 times more overseas than playing in the US.

Not only is this a huge issue regarding money however the attention that is put on Women’s sports are significantly less than their male counterparts. Young girls like me can be discouraged by the lack of equality leading to young promising athletes to give up on their dreams at one day becoming a professional athlete.