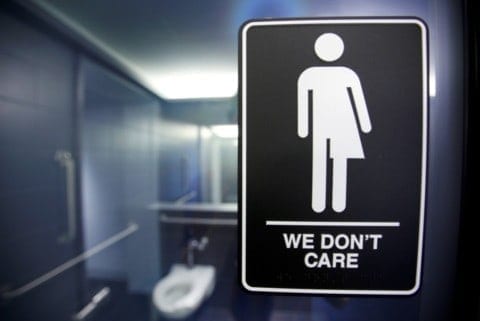 Restroom use is one of those things. Being forced to use the restroom that one does not identify with can cause unbearable amounts of anxiety. Many people who are transgender fear discrimination every time they want to use a restroom. I personally avoid having to use public restrooms so that I can avoid being hurt and so that I don’t make others feel uncomfortable. Unfortunately, those who do use public restrooms are running into many problems.

The article Transgender Restroom Use: Overview gives a few examples of legal discrimination that people who are transgender face when it comes to public restrooms. For example, North Carolina passed a bill that requires students to use bathrooms that correspond with their birth sex. Just to clarify, gender is the psychological, social, and cultural characteristics of being male or female and sex is the physical state of being male or female. There is a defined difference in gender and sex, and this bill in North Carolina completely over looks that.

The article points out that there are many cases where transgender people are discriminated no matter what bathroom they use, which is true. For example if someone who is male to female used the men’s restroom to align with their sex, they would be harassed especially if they present their self as female. However, if they used the women’s restroom, they could be reported by cisgender women as a creep if they had more male characteristics than female. While surgery and hormones are options to fix that, not everybody can afford those things. Most surgeries cost thousands of dollars and some insurances do not cover them.

Those who experience gender dysphoria often try to do things that align with their gender identity, such as use bathrooms that correlate with that. One thing about this article that I really liked was how it advocated for unisex and gender neutral bathrooms. I think that more bathrooms like that could help eliminate concerns from both sides of the argument.

I found your post, “Gender Dysphoria and Public Restrooms,” interesting because I’ve been trying to learn more about gender dysphoria and other related topics recently. I want to make sure that everyone, no matter who they are, are comfortable in their own skin.
One sentence you wrote that stands out for me is: “I personally avoid having to use public restrooms so that I can avoid being hurt and so that I don’t make others feel uncomfortable.” I think this really makes the reader understand the situation. Using personal anecdotes is pretty helpful in posts like this where you’re trying to make people understand why they should support something. Generally, it helps people see things the way you do.
Another sentence that I liked was: “For example, North Carolina passed a bill that requires students to use bathrooms that correspond with their birth sex.” This stood out for me because I don’t understand why that bill would have passed in the first place. I understand that people might not understand gender dysphoria and why gender neutral bathrooms are needed, but that bill would be very harmful to some people.
Your post reminds me of the time I saw that in a library I had regularly visited, they had changed the male and female bathrooms to gender neutral bathrooms. I was surprised at first, but then I was glad that they’d done that, since I know I’d always felt comfortable at that library and I’d want everyone else to feel the same way.

Thanks for your writing. I look forward to seeing what you write next because the post was really interesting.
Also, if you could check out the blog I have along with a couple of members in my class, that would be great! You can find it here- https://genderneutralbathrooms564415170.wordpress.com/blog/

I agree with this article, in that I very much believe that anyone would be given the ability to use the bathroom which corresponds to their gender identity, and I can personally empathize with you not going to public bathrooms for fear of making others uncomfortable or being personally hurt, and so I know the difficulties of living that way. Although in living that way, I do often find myself exhibiting internalized transphobia. I think there is an interesting discussion to be had about where this habit comes from, obviously the threat of violence that trans people face in public restrooms is a factor, but I can’t help but notice that I do also restrict myself from public restrooms for the comfort of others, which begs the fascinating question of how society has conditioned us to care about the comfort of those who clearly don’t care about our own. I know I’m reading very deeply into what is ultimately a very small part of this post but it’s just something I think about a lot. https://transhealth.home.blog/

This is article is something that is very interesting. Although I do not personally understand or completely agree with this subject, it is still interesting to know. Gender dysphoria has become a hot issue. I feel though this problem has become minimal as all inclusive bathrooms have begun to pop up all over. Here is an article (https://www.cnn.com/2017/03/07/health/transgender-bathroom-law-facts-myths/index.html) about the transgender bathroom laws you might find interesting. If you were to show me instances of this bathroom problem being a very real and very prevalent issue, then I would reread.

Thank you so much for sharing your take on this issue, especially your personal experience. I completely agree that every day trans/unsure people face unnecessary prejudice in their every day lives. I believe it is super important to accommodate those going through changes in self-identity, and its disheartening to see stories everyday about non binary people dealing with abuses from those who are unaccepting. I hope judge is a place where people can feel safe, and if not I would do everything I could to make it so.

Thank you for sharing your personal story in addition to supporting it with legal events. I didn’t realize that people made such a big deal out of trans people using one bathroom or another. While you say that unisex and gender neutral bathrooms can help resolve the problem, what happens when it is not possible for a building to accommodate for a separate or additional bathroom? I would like to hear more from you about this topic.

I really liked your comments on this issue. It’s certainly a problem that needs to be fixed and I like how you brought up that unisex or gender-neutral bathrooms should be considered more often. It was also really helpful to see your perspective and experience on the issue, and that perspective needs to be seen more often I believe. I also thought it was really important how you brought up the differences between the meanings of sex and gender.

I really enjoyed reading your article, I agree with you that public restrooms can be a very stressful place for transgender people because of the fear of being targeted or discriminated against. I liked how you talked about the difference between gender and sex and discussed how some laws overlook that. I think that is an important issue that people need to discuss more. Thank you for sharing you thoughts, I hope to read more about this form you!