What makes a good parent?

Home What makes a good parent? 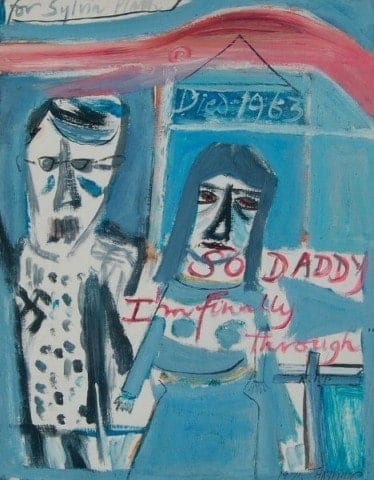 What makes a good parent? What types of things can hurt a relationship between a father and daughter? These questions are explored in Sylvia Plath’s “Daddy” written in 1962.  On the surface, “Daddy” is a novel about How she hates her father and thinks he is like hitler. On a deeper level, however, this story is Sylvia Plath’s feelings towards life .  A close reading of the story’s imagery reveals that it shows that it’s about rejection.” A line that shows evidence of this is when she says “You died before I had time’. This makes me wonder if she was feeling rejected by someone who she no longer has contact with, and she has people in her life who she has lost. These issues are discussed more into the poem. This poem goes down a dark path through Sylvia plath’s fears, regrets and worries about her life. The surface theme sheds some light of the reasoning of why she is in pain. Her father Otto Plath, died in 1940 when she was eight years old. Her family is also german-american, which explains the nazi references throughout the poem. When her father died, it was also the year that World war 2 was going on and as a young eight year old it must’ve been very traumatic to have her father die and then witness all these atrocities coming from her home country, she probably is using this poem that she created years later to finally be able to share how it felt which is how she came to creating “Daddy”.

This line from the poem “Daddy” is evidence of her using poetry to cope with her feelings. These lines specifically highlight her suicide attempt, that could’ve been in her eyes her effort to see her dad again in the after life. “She first attempted to do this by joining the father through suicide but then found an escape through marriage to a man with many of the father’s characteristics” States an literary anaylisis by Eileen M. Aird in reference to the lines previously stated. Aird’s thought on how she escapes emotional crisis is very intriguing to me because wanting to Marry someone who reminds you of a dead loved one seems kind of strange to say the least. If someone you love dies and you miss them that’s understandable but for me seeing someone who reminds me of that person would just make me miss them more. Maybe Plath did feel this pain which is why she split up with her husband and later commited suicide in 1963.

This line in “Daddy” by sylvia plath makes me wonder if this means that she also loves fascist’s or that she is not apart of the demographic that she titles “every woman”. Lines in the poem makes me think that she puts herself in this category of “every woman”, such as the lines towards the end where she uses vampire lore and nazi references to create an image of “Vampire-husband has impersonated the dead Nazi-father for seven years of marriage, drinking the wife’s blood, until she has finally put a stake through his heart (the traditional method of destroying the vampire)” Which was stated so elequently by Jon Rosenblatt for the University of North Carolina in 1979.

This line shows one of Plath’s more unhinged thoughts in the poem, she feels like she has had her blood sucked by a vampire who is also her father. This could relate to her father’s untimely death while Sylvia Plath was only eight years old, maybe the seven years could be the years she spent growing up without a father, and she resents him for dying and “leaving” her and “sucking” what could’ve been all the knowledge and feeling that comes from having an active father in her life. “ “Daddy” is obviously an attempt to do away altogether with the idealized father, but it also makes clear how difficult a task that is. Daddy keeps returning in the poem in different guises: statue, shoe, Nazi, teacher, devil, and vampire. If the starting point of Plath’s idealization of the father was the heroic white patriarch of “Lament,” the end point is the black vampire of “Daddy.” The father has been re-envisioned in terms of his sexual dominance, cruelty, and authoritarianism. Ironically, the father, who was mourned in the earlier poems as the innocent victim of deathly external forces, has himself been transformed into the agent of death. It is as if the underside of Plath’s feelings toward the father had surfaced, abolishing the entire “epic” that she described in “Electra on Azalea Path” and replacing it with a new cast of characters and a new plot. The story is no longer the daughter’s attempt to reunite with and to marry the dead father; it is now the daughter’s wish to overthrow his dominance over her imagination and to “kill” him and the man who takes his place—the vampire in “Daddy,” the Nazi in “Lady Lazarus,” or the husband in “Purdah.” Rebellion and anger supplant the grief and depression of the earlier poems.”

Also stated by Rosenblatt about “Daddy”. This comment on her poem interests me because it talks about a bigger motif that not only is shown in this poem but some of her previous poems too. This comment really helps me understand Plath as a person more which helps me understand her Poem “daddy”. In her life Plath seems like she has always suffered from this being/entity who could be her father haunting her from the grave or maybe the husband that she never got, this thing makes Sylvia Plath’s life really hard and “daddy” is her finally confronting her enemy and trying to overcome what has held her back for so long.

In conclusion “Daddy” was Plath’s last attempt to save herself from her life enemy that has manifested in her mind in reaction to many real-life struggles, like losing a loved one or divorce, Plath used poetry as a weapon against her foe, which when it comes down it was herself that she disguised as this vampire – Nazi – father figure in the poem. She did this as an effort to expose what was buried inside her feelings and put it in a way that she can comprehend and because she was a writer Plath chose poetry, which is why we see what could’ve been a cry for help before her suicide a year later after writing “daddy” as a work of art instead of a tortured soul fighting for her life. And sadly battles fought against themselves are the most agonizing and brutal, with Plath’s being no exception since we already know that she committed suicide a year after creating “Daddy” it shows that sometimes life becomes too much and you just have to say “I’m through.”

I am saddened by your essay, “Gateway – Daddy” because it’s crazy that the author hates her father for dying. I feel bad for her because he died.

One line that stands out for me is, “When her father died, it was also the year that World war 2 was going on and as a young eight year old it must’ve been very traumatic to have her father die and then witness all these atrocities coming from her home country, she probably is using this poem that she created years later to finally be able to share how it felt which is how she came to creating “Daddy”.” I think this line is sad because I don’t want to lose my father an I know I would be heartbroken like her if I did.

Another line that stands out for me is, “And sadly battles fought against themselves are the most agonizing and brutal, with Plath’s being no exception since we already know that she commited suicide a year after creating “Daddy” it shows that sometimes life becomes too much and you just have to say “I’m through”.” I think this line is sad because her depression took over her life.

Thanks for your poem. I look forward to seeing what you make next. It was a good essay. Hopefully the next one is just as good or better.

Coleman I really like this essay. It is a very good example of how to analyze a poem. My favorite parts of the essay are when you go back and forth between lines in the poem and relating them back to the author’s real life problems or situations that you think the poem is highlighting. I also like your good use of transitions and I feel good vocabulary words were used throughout your paper. I think that overall I don’t have any low lights to mention about your essay so great job , and I look forward to reading your next papers.