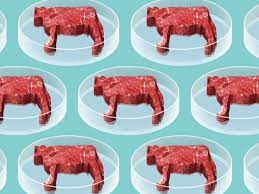 Did you know that scientists are working on developing a meat-free alternative? A lab-based type of meat is the name for this modern type of meat. It has only been attempted in Singapore so far, but we will see some here in the United States quite soon. They want to pursue this option so that there will be far fewer animal slaughters in the immediate future. They take a non-harmful cell sample from a cow, place it in a bottle, and then scientists add nutrients to it, and it begins to transform into a piece of meat. According to a study published in the Journal of Animal Science, For example, preparing a quarter-pound hamburger requires nearly 7 pounds of crop feed, 75 square feet of ground, and nearly 53 gallons of water. However, some people have complained that this meat substitute is also a bad thing because fossil fuels are used to produce these meat substitutes. As a result, there are certain advantages and disadvantages to this newly established concept. People who have tried this meat substitute, such as Chase Purdy, have said it tastes “exactly like the meat you would expect it to taste like.”

This seems to me to be extremely beneficial to all on the planet. This meat substitute will allow us to conserve more resources that we need to stay alive, such as water and other essentials. However, there is still the possibility that we will release more fossil fuels, which will have an effect on our environment.

What are your thoughts about this possible future meat?

Dear Brian :
I am concerned about what you posted, not about you, but about the information presented. It’s bizarre to hear things like lab grown meat. Really makes you think how far we’ve gone in science.
One sentence you wrote that stands out for me is: “…place it in a bottle, and then scientists add nutrients to it…” I think this is kind of monstrous to be honest.
Thanks for your writing. I look forward to seeing what you write next, because it was a quite interesting thing I haven’t heard about before.
TB