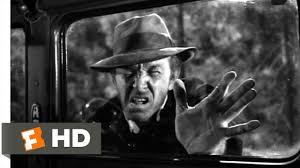 So, as you can see I’ve read further about the play “To Kill a Mockingbird.” I’ve been thinking that this play would only get better and better, which it is. So far, this book has been fascinating. I feel that this book is a great example of reality and how people are living today. There is still racism going on in reality today which leads to unfairness. I am very satisfied on getting to read more about this book and I’m thrilled to see what happens next.

The second part of “To Kill A Mockingbird” might leave a reader feeling alarmed. I think this because in scene 2 Mr.Ewell was terrifying Atticus and his kids. According to the screenplay (line) 174 it states “he is unsteady and holds on the side of the car staring at the two children. Atticus comes to the car Ewell stares drunkenly at him. Atticus gets in the car besides scout.” This shows that Ewell is frightening atticus’s kids. Also on lines 175  Atticus states, “no need to be afraid of him son, he’s all bluff.” Mr.Ewell later tells Atticus on line 176 “Nigger lover”. This tells us that Ewell is trying to freak Atticus out, but it’s not working. Also, Ewell was being racist by calling Atticus a “nigger lover.”

We learned something interesting about atticus on line 175 when he tells his son Jem, “Don’t be afraid of him he’s all bluff.” This shows that Atticus isn’t afraid of mr.Ewell and that he wants to protect his son and doesn’t want him to be afraid either. This is typical of how the character acts in the book so far. He often seems to be a independent father that wants the best for his kids. I think a reader of this play would love to be Atticus’s friend because Atticus is a generous man who loves to protect as it shows in this play.

After this part of the book readers would be looking forward to seeing the next part of this play because it motivates readers to see what happens next between Ewell and Atticus’s relationship. I think that ewell will continue to try to frighten Atticus’s kids and Atticus will put an end to it.

Hatou, I think you did a great job of integrating the theme of the book/ movie and the specific scene Throughout the book new stories encounter racism at every turn, and it makes people uncomfortable because it calls them out for what is wrong with our world. I really respect Atticus and his positions on issues. I think he is strong in his morals and I respect that. Here is an article you might like https://www.urban.org/features/structural-racism-america . It focuses on racism in America and its day to day affects. Overall great job!
-Anna