For One Family in Houston, an Overwhelming Start to Recovery

Home For One Family in Houston, an Overwhelming Start to Recovery

HOUSTON — She couldn’t sleep. Not now.

Kris Ford-Amofa lay next to her husband in a spare bedroom at her sister’s house, thinking once more about the brown water that had slithered under the front door of the first home she had ever owned. The water that swirled around her three children as the family fled, wading up City Green Trail to seek refuge at a neighbor’s house. The water that had buckled their living room floor, rotted the drywall and made them homeless. The floodwater that was not covered by their insurance.

Where did she even start? On Thursday, she got up early, set two phones on the kitchen table — one for Federal Emergency Management Agency, and one to call Enterprise about a rental car — and started dialing, launching into her third day on the job as a disaster-recovery coordinator for her upended family.

With no preparation and few road maps to guide them, tens of thousands of hurricane survivors like the Amofas are now stumbling through their first bewildering days after Harvey. The rains may have passed, but now they are consumed with worry about their children’s futures, precarious family finances and what remains of the homes they fled.

They need to find their way out of shelters and relatives’ extra bedrooms. Find new schools for their children. Find hotel rooms when everything is booked, find rental cars when everything is taken and find the time to gut their homes, call contractors and hack through layers of bureaucracy, all while bills pile up and bosses call them back to work.

An hour and a half into her morning, Kris, 43, was nowhere. Growing up in rural Louisiana, she knew floods and tropical storms. She had fled Hurricane Rita in 2005. Still, she was not equipped for this.

She had filed a claim with FEMA, but was told she needed to send a declaration and release form. She didn’t have her laptop, and she couldn’t find the right paperwork with her phone.

She listened for a minute, head in hand.

“This is not the help line?” 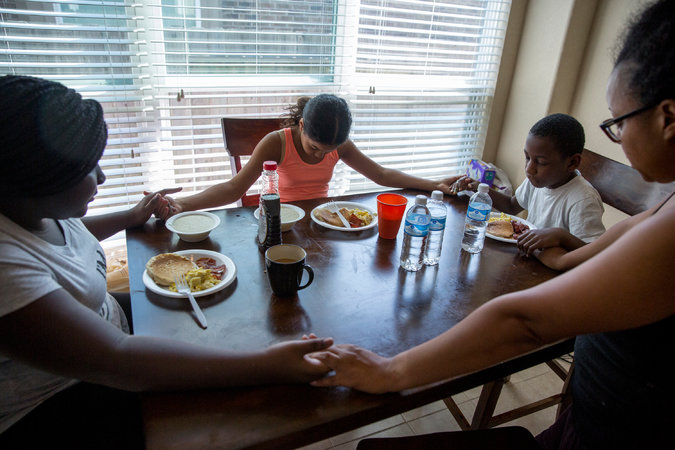 ‘We Need a Boat ASAP’

“We need a boat asap!!!” Kris had written on Facebook. “The helicopters are not picking up by us!!! Please anybody!!!”

Harvey had made landfall on the Central Texas coast late Friday. Now it was Monday, and the waters were still rising across Houston. On the Amofas’ street, the water was topping car windows and reaching the height of small children. And it was flowing inside the beige-brick home on the northeast side of town where Kris and her husband, Yaw Amofa, 47, had lived for less than a year.

The family thought they would be safe. Kris had a second floor. The federal government said the area was at “minimal hazard” for flooding. So they bought milk, eggs, loaves of bread, and hunkered down for the weekend, joined by Kris’s younger sister, Miesha Jolly, 36, and Miesha’s three children.

It had taken Kris and Yaw six years of work to buy the house. Six years of saving up, fixing their credit, attending personal-finance classes and debating whether they should invest so much money and risk into a single $180,000 purchase.

Yaw, an immigrant from Ghana, said it was their American dream. The family moved from southwest Houston to this new subdivision on the edge of the woods, a slice of suburbia so newly built that the family’s address did not yet show up on some online maps.

When they moved in, they hung a sign on the living-room wall: “Home — where life begins.”

Now, they needed a way out. Miesha’s husband was trying to return from his job on an offshore oil rig in the Gulf of Mexico. That left three adults and six children in the house — including Miesha’s 4-month-old daughter, her 2-year-old son, and Kris’s oldest son, Jason, 17, who has autism and walks with difficulty.

As the waters rose past car doors and seeped into the home, the family called 911, the Coast Guard, the Cajun Navy volunteers who were zipping around the city in bass boats and Jet Skis. The children waved white T-shirts out the window.

Nobody came. The children tried to stanch the water with towels and sweatshirts. Phones blared with tornado warnings. Then, the power went out. The water in the living room started crawling up the stairs toward the bedrooms.

At 9:14 p.m. Sunday, Kris posted on Facebook: “We’re gonna have to make a move cause the water is coming through the doors and under the base boards like a river!!”

Around noon the next day, they threw a few clothes and papers into backpacks. The family, who link hands for grace before meals and attend a Baptist church, tried to gather strength. “Jesus remove this fear from me to actually get on it,” Kris wrote to her 378 Facebook friends.

And then they set off through the flooded street. Kris’s younger son, Joshua, cried that he didn’t want to leave and clung to the driver’s side-view mirror of their new 2017 Nissan Pathfinder, now swamped with water.

They pried his hands away and waded down the driveway. The water was up to the children’s chests.

With one arm, Kris guided her older son, Jason. He loves water, and she had to make sure he didn’t stray into the currents bobbing with garbage and portable toilets unmoored from construction sites. With her other hand, Kris helped carry Miesha’s 2-year-old son, Trey, tucked into a plastic garbage can that was padded with backpacks.

They strapped Miesha’s 4-month-old daughter, Quinn, into her car seat, set it into a plastic bin and entrusted the baby to the two oldest girls: Kris’s 12-year-old daughter, Raechel, and Miesha’s 11-year-old, Lejla. The girls floated the baby up the street as she smiled at the rain spattering her face.

They took shelter in a still-vacant house up the block, but decided the water was rising too fast. They went on, and ended up at the home of a neighbor, who was cooking hot dogs and hamburgers for the makeshift evacuation shelter that was sprouting up in his home and garage. 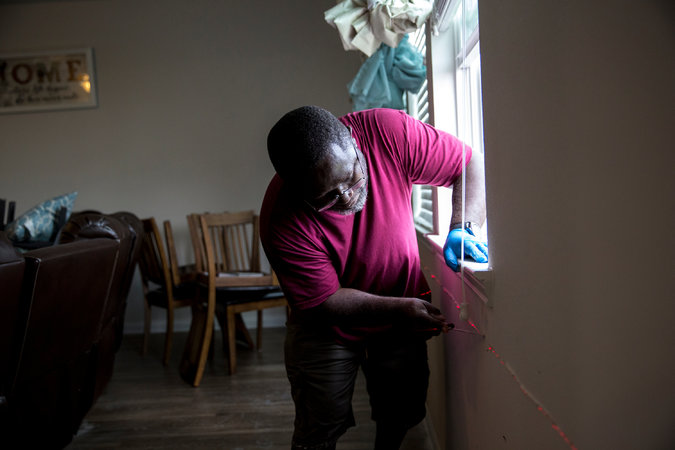 Trying to Save a Home

Three days later, Kris’s husband, Yaw, felt as if he was behind schedule. Although the waters had receded, the Amofas could not stay in their home. The first floor was soaked, and already smelling of mildew. The families were camped out together at Miesha’s house in northeast Houston, which had stayed dry: four adults, six children and a dog.

All morning Yaw and his brother-in-law had tried unsuccessfully to find contractors and drywall experts to inspect the damage. They had received conflicting information about whether they should start tearing up the walls, or wait for a professional to inspect the house.

Time, heat and water were Yaw’s enemies now, conspiring beneath the carpets to rot and putrefy. A family down the block was already ripping out their soaked floorboards. His next-door neighbor’s leather couch was already bearded with white mold. When Yaw returned to clean up and inspect the house, he decided he couldn’t wait.

So, without masks, he and a neighbor marked a line on the walls and started sawing away with wood-handled kitchen knives. Drywall crumbled like soggy meringue. They yanked out insulation, which dripped like wet wool, and threw it onto the front yard, Bob Marley’s “Natural Mystic” playing in the background.

“Things are not the way they used to be,” Yaw sang.

Yaw had worked at Home Depot before getting his civilian job in customer services with the Houston Police Department. But he was out of his league here. He had studied philosophy, not construction, years ago as an exchange student living in New Jersey.

“It’s hitting me right now,” he said, “the depth of the work we have to do. And this is just the beginning.”

He said they needed to pull up the floors, throw away the furniture, tear out the cabinets, inspect the wiring, call contractors, figure out how to pay for it all. Would they be eligible for any federal aid or loans? Could they take on the additional debt?

Kris was racked with regret that her family — like most those who suffered flood damage — did not have flood insurance. She had always tried to stick to a budget, down to choosing the pancake syrup that gives her the best value. It could be months before she knows Harvey’s toll on their finances.

Her boss at the suburban hospital where she posts payments had told her to take as much time as she needed. But Yaw said he had to go back to work on Tuesday and he didn’t know how he would find time to do it all.

Yaw’s neighbor walked in with a gift: a dust mask. Yaw snapped it on and turned back to the wall.

“Where did I put my knife?” 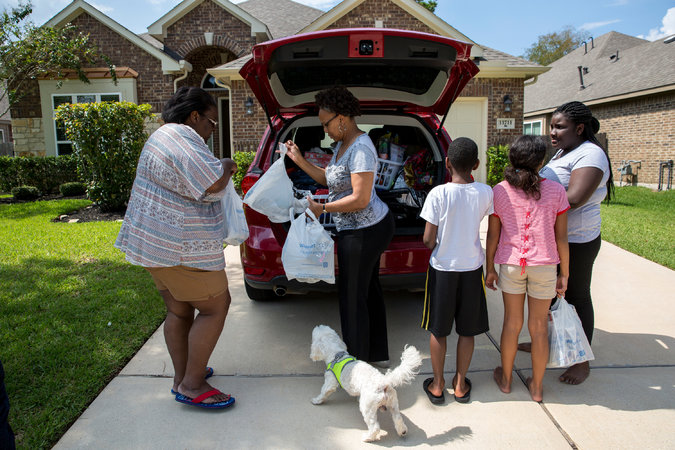 When a friend took Kris to Walmart to buy new clothes for the children, they queued up outside in a row of people who shared photos of the damage, recounted boat rescues and National Guard convoys, and short-handed their fortunes: Water just up to the driveway. In the garage. First floor. Lost everything.

When Kris and her sister went to the just-reopened H.E.B. for groceries, they waited in a line that stretched around the store’s perimeter.

When she checked out, Kris said, the cashier told her that a package of hamburger buns put her over the limit of two bread items per person.

But amid the frustration, she experienced moments of blessing. Friends paid for two carts full of clothes, food and other supplies at Walmart. Three strangers paid for her groceries one morning. Her sister Miesha, an inseparable companion, said Kris, Yaw and their children could stay with them as long as they needed.

Their children were treating their displacement like an extended slumber party. Lejla and Raechel, the oldest girls, sang songs together and looked after the younger ones. Jason, who does not speak, hummed to himself on Miesha’s couch and listened to classical music, his favorite, on YouTube.

Thursday was ending, and Kris felt as if she had barely moved forward. She had finally found the FEMA form and sent it in, but was no closer to filling the most pressing need of a rental car so she and her husband could get around and get to work.

She had always been fiercely independent. Growing up in a tiny town in central Louisiana, she had to take care of the house and her younger siblings. She had left home and hitched a ride to Houston after she finished high school in 1992. Now, she realized as she sat at the kitchen table, exhaustion washing over her, that Harvey had stolen her self-reliance.

Her sister, fresh from styling her hair for the first time in days, sat down at the kitchen table.

The women talked about their childhood and their parents, about how the older sister had moved across this sprawling metropolis to be closer to the younger, how they chat on the phone as they drive to work, and about the rainy afternoon that they guided each other out of the flood.