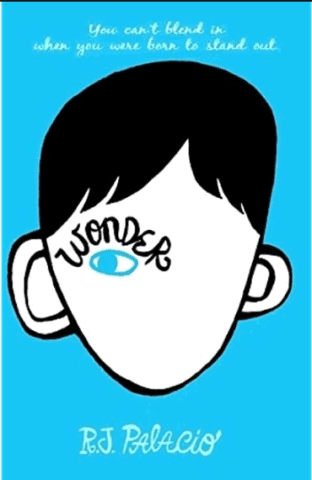 Recently, I read Wonder by R.J. Palacio. I enjoyed this book. This story was touching and sad to read at times because it’s so sad how much Auggie had been through at such a young age. In the beginning of the book when the readers are made to believe that he has true friends that he has people to support him we then get told something else. We feel bad for Auggie because we see what all this teasing and bullying does to him. This book helps us see through a perspective that some of us have never been through. It is also told through the perspective of many people and it allows the reader to see through those perspectives and understand that everyone has struggles in their lives.

The protagonist is August Pullman. His story is set in New York around 2012, specifically New York City. The significance of New York City specifically talking about in the Beecher Prep setting is that we see Auggie tackle public school with a bunch of kids who do not look the way that he does. The significance of the setting shifting from homeschool to public school which is Beecher Prep is that since he was being homeschooled he did not have to face kids and the only people he ever talked to were his family members. When he went to public schools he had to face the truth about what made him different on top of other kids judging him. In New York City the schools are bigger and they have more kids and it was a big change from what Auggie was used to.

August Pullman faces certain forces and pressures. Auggie has to face all these kids now because he has to go to public school. He meets these forces and pressures by deciding to go to public school and trying to navigate it but also trying to make friends that are real and care for him. This is hard for him because he can’t tell who is a real friend and who is not. You can see this early in the book on page 45 when he is going to his classes and seeing kids laughing at him.

The tension rises on Halloween when Auggie is wearing the scream mask and he overhears Jack talking to a lot of popular kids saying that he would kill himself if he had to look like Auggie. This might leave a reader feeling terrible. In the beginning of the book when Jack Will and Julian are giving him the tour the readers see that Jack Will is nicer to August than Julian is. Jack Will is looking forward to be his friend and the reader see a true friendship spark but when the readers saw what happened on Halloween the readers feel terrible for Auggie because he loves Halloween because everyone can wear a mask and dress up and no one will judge you but that get ruined when he heard what Jack said about him.

The book climaxes when August and his family members realize that Via is going to be in the school play and that she doesn’t want August to come because she does not want to keep being known as the sister who has a ‘deformed’ brother. The family gets into a big fight then their dog Daisy is sick and they had to put her down. “I pulled my arm away and pointed at Via. “You think I don’t know what’s going on?” I yelled. “You just don’t want your brand-new fancy high school friends to know your brother’s a freak!’.”

The falling action ultimately resolves the conflict. On the camping trip with the school Jack and Auggie went to go pee and a bunch of older kids from another school saw them and they started to make fun of Auggie and Jack tried to fight them off but they couldn’t but then Amos, Miles, and Henry showed up who were kids to make fun of Auggie and they protected and helped Auggie and Jack instead. It’s a person v. society  type of conflict that’s driving this story. August had to face what public school with other kids brought. Not only that Via had to face problems too like the conflict with her and Miranda and not being given attention in their home and always being dismissed. We also see Jack’s issue because he is not wealthy like the other kids in the private school which is what led him to make fun of Auggie because he wanted to fit in. We see Summer have to face choosing popularity and Auggie and she ultimately chose Auggie. We see everyone in this book having to choose what is right for them especially dealing with wanting to fit in.

I enjoyed reading your article because I have read the book and have seen the movie. I also agree that it was touching and sad at times throughout the book. One sentence that stood out for me was, “The tension rises on Halloween when Auggie is wearing the scream mask and he overhears Jack talking to a lot of popular kids saying that he would kill himself if he had to look like Auggie.” I think that once Auggie heard that from his friend Jack he felt betrayed because he was feeling like he had at least someone to hang out with. I also think that sentence can imply to everyone because when you find out your ‘friend’ has been talking about you behind your back it can feel like you have been lied to and can maybe develop trust issues. Thanks for your writing. I look forward to see what you write next.

I really enjoyed reading your piece as much as I did reading the book. This has got to be on my top 3 books I have ready while in school. What I felt was unique about it was how they took almost a mediocre message and took it to the moon. You should never judge someone based on what they look like cause we as humans can only control what we look like so much. Every human is human no matter what they are we all are the same, we are one.

Dear Emmanuel,
I was interested in your post because Wonder by R.J. Palacio is one of my favorite books. I agree with you about how this book was enjoyable. I think its how all the different feelings you feel throughout the whole book that makes it enjoyable and wants to keep on reading it.
One thing you said that stands out for me is: “You just don’t want your brand-new fancy high school friends to know your brother’s a freak!’.” I think this is sad, to be honest, because well it’s just sad that Auggie thinks of that.
Also, that sentence that you included in your post, reminds me of something that happened to my sibling (my sister). Sometimes when like something that doesn’t “go her way” she uses the “it’s because I’m deaf” card on us all the time. We know it’s a joke as she doesn’t really mean by her using her disability in a bad way. She loves it, we love it, it’s amazing in its own way!
But besides that, thanks for your post. I look forward to seeing what you write next!