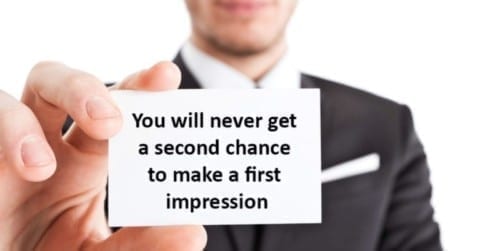 Picture this, you are preparing for a job interview, or for the first day at a new school.  You pay special attention to how your hair looks, what you’re wearing, how you do your makeup that morning.  You check and double-check these things to make sure your appearance is the best it can be.  Why do you do this? You do this because you want to make a good first impression.

First impressions are so important because there is never a way to make a second first impression.  This is because studies have shown, “that all it takes is a tenth of a second to form an impression of a stranger from their face, and that longer exposures don’t significantly alter those impressions,” (Wargo, 2006).  Yes, most times a person is judged based on their facial features.  Whether a person has a “mature” face or a “baby-face,” if they look trustworthy, or likable, and these impressions are the most powerful in judicial matters or in an election.  And more often than not prolonged exposure to a person does not change these judgments especially if there is no verbal exchange between two people.

Of course, there are other factors that determine the first impression.    Most are visual, facial features, body language, and overall appearance.  Others include verbal exchanges, for example, in a job interview, if the person speaks to their potential boss with respect or with informal language.  Or what kind of vocabulary a person uses and if they use it correctly.  While these factors aren’t as important as a person’s facial features.

Maria,
I really enjoyed this post. I personally, think first impressions are the most important. I always make sure that my first impression is the best it can be by wearing a nice suit, makeup ect. I really like how you said “you can’t make a second first impression”. When I meet someone for the first time thats what I go off of. I usually never give people second chances because then you won’t see the real authentic them but you will see a version of themselves that they have made up so that you could maybe like them. First impressions are the biggest thing not only for me but for almost everyone.