First Analysis of “One Art” by Elizabeth Bishop

Home First Analysis of “One Art” by Elizabeth Bishop 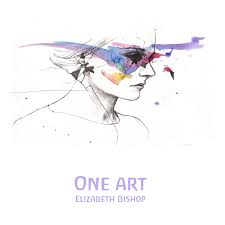 One of the first things I noticed in this poem was of the phrase, “The art of losing isn’t hard to master,” because it was one of the sentences that kept repeating itself and I found it confusing yet at the same time, captivating. The next lines especially make me curious

The other feeling, of confusion, arises when I read the lines:

It was confusing to me that she had been talking about losing items and memories/thoughts but then started talking specifically about different topics.

In this poem, Elizabeth Bishop is giving examples related to the art of losing things. I believe she is speaking to reader’s that worry, but also those who are not aware of losing stuff. I do not think this poem springs from a particular historical moment and/ or a specific culture. Elizabeth Bishop gives me a feeling that she is very thoughtful, self-aware, and strong because in this poem she’s telling us that whatever you were/are to lose in life, just remember that you will do just fine and it won’t destroy you.

This tells me that she has been through this, losing things that mattered and that needed to be remembered, and she got over it every time she lost something. For example, this line, “Lose something every day. Accept the fluster of lost door keys, the hour badly spent. The art of losing isn’t hard to master. The poem revolves around several themes, including loss and overcoming.

If I was to think of one theme, I think my theme is overcoming the loss in this poem. If this poem were a question, my answer would be that losing things isn’t the end of the world, neither will it bring disaster. If this poem were an answer my question would be, why do we think that by losing things we should frustrate ourselves and suffer from it? The title suggests that this art of losing things is like no other, you can think about your loss of these things but you shouldn’t suffer from the loss of it. Which is like an art for itself, therefore is why I believe she named this poem “One Art.”

THE POEME “THE ONE ART” ITS FANTASTIC!!!