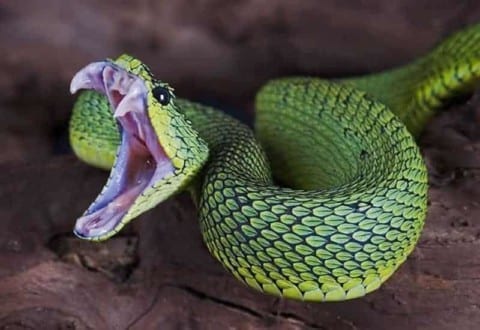 Fear is defined by Webster’s Dictionary as an, “unpleasant often strong emotion caused by an anticipation or awareness of danger.”  Fear is most likely a familiar emotion to most people, fear of loss, fear of the dark, even fear of holes.  It relatively well accepted that there are two different kinds of fear, learned fear and inherited fear.  Learned fears are those that people develop as they grow and are exposed to unfamiliar things.

Take for example snakes.  A paper was published in Current Directions in Psychological Science about a study done involving toddlers and testing their fear of snakes.  Some of the children were as young as seven years old, and in one of their rounds of study they put two pictures up for the child to look at, snakes, and something else that was deemed less threatening.  A voice recording was played, one was happy and one was more of a scary voice recording.  The children spent time looking at the snake images when the scary voice was playing, but it was not the snake they were interested in so much as the voice itself.

Another example of this is a shock ball toy.  I have first hand experience with this myself.  A few years ago at Christmas my brother received a shock ball toy, one that you play hot potato with and whoever is holding it when the clock runs out gets a light shock.  All the adults and oldest children were afraid of holding it, because we all knew that we were going to be shocked.  However my younger cousin, not much older than a toddler at the time was fine holding the ball.  The ball shakes when it shocks, and all the onlookers so the ball shake quite a few time, but my cousin had not learned to be afraid of it yet.  What scared him were our reactions when the electric currents would happen because we were making too much noise and behaving in a way that he wasn’t expecting.

On board with fear there are also phobias.  A phobia is defined as “a persistent irrational fear.”  Some common phobias are arachnophobia, fear of spiders or other arachnids, fear of germs, and aerophobia which is the fear of flying.  The media, namely movies and tv shows, will take these fears and use them to their advantage.  American Horror Story Season Seven made a big deal about adding phobias into their program.  They played mostly on the fear of clowns and trypophobia, which is the fear of holes.  In their advertising they used many images of beehives, in the regular program two of the characters were beekeepers, and there were often images of coral shown throughout the show.  The antagonists also dressed up like clowns so they could wreak havoc and harm people in both a scary, and anonymous way,

This, however, is not the only source of media that uses fear as a broadcast tool.  The fear of spiders has also been played on repeatedly in movies like Arachnophobia, Tarantula, and Kingdom of the Spiders.  Fear of snakes has also been played on many times in such films as Snakes on a Plane, Snake Island, Anaconda 1-4 and Lake Placid vs. Anaconda.  IT plays into the fear of clowns, Kujo plays into fear of dogs, and the list goes on and on.  The media plays on peoples fears because fear often attracts an audience, and an audience makes the production company more money.