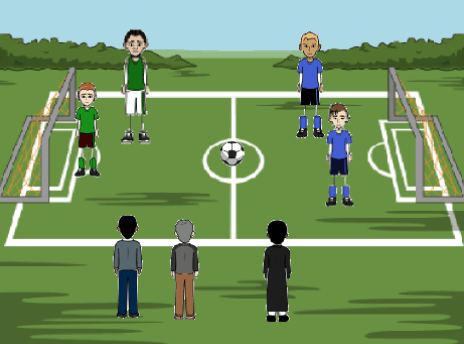 Here are the characters in my story:
George:An eighteen year old trying to complete his father’s wish for him which is to become the best soccer player in the world. Bob Junior: Another eighteen year old trying to complete his father’s wish which is to make sure Thomas, who is his dad’s mortal enemy, doesn’t get his wish fulfilled. Thomas (George’s Father):A forty year old who was scammed out of millions of dollars from his best friend, Bob Senior, when he was younger. Since then, the ex-best friends became mortal enemies. Bob Senior (Bob Junior’s Father): Another forty year old who scammed his best friend, Thomas, for over millions of dollars when he was twenty four years old.

In my project I will have a protagonist and an antagonist. The protagonist is a boy named George who wants to achieve his father’s wish for him which is to become the world’s best soccer player. However, there George’s father has an enemy. His enemy’s son is named Bob. Bob’s father has one wish too. It’s to make sure his enemy’s wish is never completed so Bob has one goal right now. To make sure George never becomes the world’s best soccer player. In Act I, George’s father tells his wish to George. Then, in a different background, Bob’s father reveals his wish to Bob. Then Act II will begin. George is on a soccer team and there are scouts coming to watch his team play. Bob however is on the other team. Once the game starts Bob tries to injure George so he can’t have a chance of being scouted and even becoming a professional player. Bob succeeds in doing so. But George still played, to everyone’s doubt, and scored. The scouts had left and Bob thought he succeeded. However in Act III, George receives and email. It says he’s a good player and he was accepted to a team in London named Chelsea. Then he became the best.

First I created the concept, then I started on the script, once I finished the skit, I started working on the storyboards. Once all that was done, I started doing my actual animation.