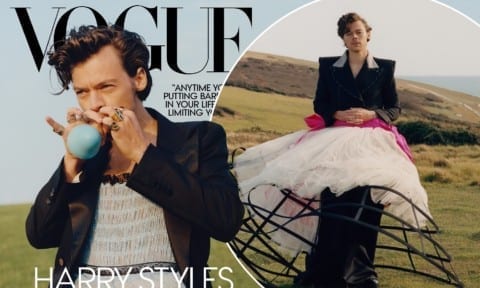 In today’s society, it may seem difficult to come into terms with a lot of people’s difference of opinions. Although we are all entitled to share our voice and thoughts, I believe that it all comes down to the respect we show others for their different beliefs. Throughout history, the one controversial topic that always seems to pop up is the definition of masculinity and what it means to be a true man. Some part in this debatable topic can stem from the things that men put on their bodies – clothes. Fashion has always caused great questions and as history changes, fashions seem to, in some aspect, change with it.

When you first think of Ernest Hemingway and Franklin D. Roosevelt, you may picture men with brilliant minds. And although they are intellectuals,, they were also some of the most famous individuals of the 20th century to have their picture taken wearing skirts. Though this may come as a surprise, the 1920’s was a time like no other. In the early twentieth century, pink was considered by numerous guides to be more suitable for boys and blue for girls. Many U.S. retailers including our own, Marshall Field, advised parents to dress boys in pink and girls in blue. Regardless of color, both genders would wear dresses. The clothes back then that were worn by boys and girls were nearly identical, indistinguishable from one another (indiatoday.in). The fashion trend of boys in dresses slowly died out but returned in the 1960s and 70s where men routinely dressed in what would be considered women’s clothing today. In those days, men wore high heels, skirts and dresses with belts.

Fast forward today, men in the music industry are starting to challenge gender fashion norms. Gender-fluid style is gradually immersing hip hop culture (liveabout.com). Rappers like Kanye West and Jaden Smith have brought attention to skirts in today’s society. Pharrell Williams made history as the first guy to model for any Chanel handbag campaign. Williams also frequently incorporates women’s pieces in his wardrobe (revelist.com). Fashion is gradually evolving and more artists have influenced others to express their feelings through their outfit choices.

Most recently, Harry Styles has stirred conversation about his clothes. He made Vogue history on November 13th rocking a skirt as the first solo man to appear on the cover in the magazine’s 127 – year run (billboard.com). Harry Styles shared in the article, “The people that I looked up to in music — Prince and David Bowie and Elvis and Freddie Mercury and Elton John — they’re such showmen. As a kid it was completely mind-blowing. Now I’ll put something that feels really flamboyant and I don’t feel crazy wearing it.” Styles later shares how, “I think if you get something that you feel amazing in, it’s like a superhero outfit. Clothes are there to have fun with and experiment with..” Many people have spoken out about their thoughts on Harry Styles making history wearing dresses and skirts on a famous magazine cover pleading to, “bring back manly men” and calling Styles’ outfits, “steady feminization of our men.” On the other hand, there were tens of thousands of messages quickly flooding social media with words of support for Harry and praising him for defying toxic masculinity. Harry Styles like several other famous celebrities have come to terms with what they feel comfortable wearing and like to express themselves through their clothes which influences others to do the same.

Fashion has always been a great way to express yourself. It is something that makes you even more unique than you already are. I believe that this harms no one and is a great way to express your feelings and show your creativity in a way that should not be judged. Although some people may be sensitive to examining and exploring gender roles in society, I believe that change happens for a reason, and that this is not something we have never seen before. In today’s society, people might be quick to judge but it is important to remember that we are all human and we should respect one another’s harmless beliefs and uniqueness.

Desk, India Today Web. “The Times When Men Wore Dresses and There Was No ‘Pink for Girls and Blue for Boys’!” India Today, India Today, 28 Mar. 2018, www.indiatoday.in/education-today/gk-current-affairs/story/the-times-when-men-wore-dresses-and-there-was-no-pink-for-girls-and-blue-for-boys-1199794-2018-03-28.

I am amazed by your post, “Fashion and Men” because the post focuses on fashion in terms of skirts and “feminine” clothing being worn by men. I have become a huge fan of men expressing themselves with this type of clothing.

One sentence you wrote that stands out for me is, “ Fashion has always been a great way to express yourself.” I think this is motivational for anyone who wants to wear clothes that are considered feminine. Fashion has no limit and as long as an outfit makes someone feel good about themselves that is enough. I believe that fashion is fashion and there should not be any categories such as clothes for women and clothes for men only. It is okay to step out of that mindset because everyone has the right to wear what they please.

Thanks for your writing. I look forward to seeing what you write next because I agree with everything you had to say. Also, I stand with this new fashion for men and I would like to see what else you can say about this subject.

I love the way you begun by showing men from our past, our history and how they were both strong yet wore clothes seen today as “feminine” type of clothing. You were able to show how even before this was normal, it’s always been normal it’s just society has changed it to make it seem like a bad thing. You’re argument was valid and easy to understand plus convincing with the men you chose to include. The men you included were all big figures then and some still are today so including them and their choice in fashion were strong and valid.

I personally agree that clothing is more of a way to just experiment and explore one’s sense of fashion. Clothing is clothing, it shouldn’t have gender affiliated with it. Since when did skirts become limited only to women or heels or anything else? People shouldn’t feel limited to only a certain form of clothing or colors because of what society deems acceptable or right. We are entitled to our own opinions and styles and I love the way today’s artists are challenging that and letting their opinions and values be seen. As the current generation, we need to be more accepting and less judgmental towards others and what they do.

Do you think clothing should have gender related to it?

KARLA,
I really appreciate how you included when Harry Styles said that clothes are something to experiment with and if you feel amazing in it, it is like a superhero outfit. Because that is truly all it is. What one wears should have no affect on others, although it often does. If one feels amazing in what they wear, WHO CARES! Let them be happy with who they are and who cares if the “gender norms” are broken! I loved this blog post Karla, amazing job!

I am excited about your post because I have been a follower of Harry Styles since he was a member of One Direction. As a member of One Direction, Harry Styles had limitations on how he presented himself in terms of his fashion, as the record label wanted to attract a certain audience of young, boy-crazy, teenage girls. The record company did not allow Harry Styles to openly express gender-related ambiguity in his clothing choices. Now, during the course of his solo career, Styles has openly expressed his claim that if an article of clothing adequately positively embodies who you are as a human-being, you should be able to wear it, regardless of gender.

One thing that stands out for me is “Many people have spoken out about their thoughts on Harry Styles making history wearing dresses and skirts on a famous magazine cover pleading to, ‘bring back manly men’ and calling Styles’ outfits, ‘steady feminization of our men.'” I think it is important to remember that someone’s fashion choices have no effect on the quality of content that an artist presents to the world. Whether Harry Styles wore a suit or a skirt to his Vogue photo shoot, he is still a three-time Grammy-nominated solo artist, as clothing does not devalue his successful career.

Your post reminds me of men painting their nails. Due created boundaries that deem fashion choices as either feminine or masculine, most men grimace at the thought of painting their nails. Recently, however, men have been inspired to explore fashion and beauty trends on TikTok, and they have begun to wear nail polish too, serving as a means of self-expression. It it were not for highly-influential role models like Harry Styles to vocally advocate for fluid self-expression with fashion choices, then the trend of men wearing nail polish might not have advanced to the level that it has on the social media platform.

Thanks for your post. I look forward to seeing what you write next because you provided thorough historical context that allows the reader to see that fashion throughout history is not set. Rather, fashion has always served as a form of additional expression of oneself, something that no one can change. I appreciate your ability to connect past traditions with current trends in society.