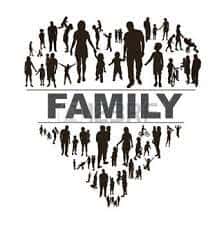 What matters to me the most are my nephews and nieces, because I feel the need to be a role model to them. If it wasn’t for them I probably would have not came back to school after I dropped out my sophomore year. When I dropped out of school, I didn’t really care until I had a conversation with one of them. I was asking him what he wanted to do in the future he said a profesional soccer player, he then asked me “What about you tia”. I stood there with no answer, thats when I knew I had to go back to school, and set an example for them. No one means more to me than them. I currently have four nephews and four nieces, and one on the way. Growing up I never had no younger siblings, I am the baby out of my siblings, so when my nephews and nieces came into this world they took the role of being my younger siblings. I think having a role model and having someone for them to look up to is very important. Coming from a big family and being the baby, people will probably think that I had a lot of role models in my life, but I don’t really. Out of all my seven siblings only one of them graduated, and I don’t blame them for their mistakes. But it would have maybe been a different situation if I did have them as a role model. That is why I believe that my nephews and nieces need someone to have as a role model, and even more so realize that shit can be done, after hella times failing. I believe that it is even more important to have someone who struggled and still made it than having someone who just successful the whole time. For me it is very important to have them look at me as their role model. Like I’ve said before they mean the world to me. My nephews and nieces will always be good as long as I am alive, they will always have my support and will always get my advice when they need it. Nothing in this world means more to me than the well-being of my nephews and nieces who are here in the physical world already and still many more who are yet to come. My oldest sister is next month giving birth, so just another nephew who I will have to be a role model too. I still have three other siblings who are yet to have children until then, the ones who are here in this world will always have me as their backbone and hopefully, they look at me as their role model.

Dear Lis,
The love that you have for your nephews and nieces is so beautiful. They are your motivation to continue with struggles that come up. I’m hella happy that you are the strong mujer I know, and that will be graduating with me! Thank you for writing a piece that really stood out. Hella xingona!

Dear Lis,
I really like how you show us the love that you have for your nephews and nieces. I love the part where you talk about how you try to be a role model for them and that they motivate you to keep going because motivation is a key to success. I love how you also talked about how your brothers struggled but still made it because it can give your audience a sense of hope to keep going even if they are struggling.

Dear LIs,
I appreciate the time you took to write about your family. While reading your memoir piece I had a clear understanding of how much your nephew and nieces mean to you. What stood out to me is how you reflected the type of person you are and how you want your nephew and nieces to see you as. Thank you for writing this memoir about your family.