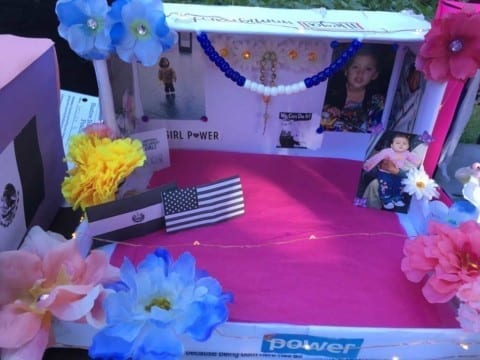 The shadow box represent me and my many assigned and chosen identities. When people look at me they see that I am Latina and because of this they assume that my ethnicity is Mexican. This is why I choose to add the Mexican flag on the back of my shadow box because it’s the dominant narrative of being Latina/Hispanic. The counter narrative of this stereotype is that I am actually Salvadoran and I love where I come from. El Salvador is a beautiful place and even though I have never been there I still love the culture and everything I have seen in pictures. Other than the Salvadoran flag, I have also included the American flag because being born here has affected me greatly. Ever since Donald Trump became president, many people think that Latinos are illegal, but this is incorrect because there are many Latinos that have nationality here in the United States like me. Even though I was born here, my parents were not. I know all the struggles that they had to go through in order to come to the United States to get a better life. They had to leave their family behind in order for me and my brothers to have a good future. I  have chosen to include a baby picture of one of my brothers in my shadow box because it shows that one of my identities is being a older sister. Being an older sister has affected my life because I usually have to babysit my younger siblings whenever my parents aren’t home. Also, being an older siblings has come with the task of wanting to be a good example for my younger brothers. Since I am the first child, I want to make my parents proud and to show them that they made the right choice leaving their home country. My gender identity is female because I choose to identify as female.The girl power picture is very important to me because women are powerful and strong even if society says we are not. We have a lot of stereotypes placed on us, one of them is that we need to have a perfect body and need to wear makeup and if we dont we are called ugly. But my counter narrative is that I don’t need to be a certain way, I am beautiful the way I am. My box has flowers all around because they represent how I am growing up as a woman and as a person in general. I have entered high school which is a big part of my life and this is where I will make important choices. Finally, the fairy lights in my shadow box represent the bright future ahead of me that can’t be stopped even with the dominant narratives placed on me.

Dear Kelly,
I really enjoyed reading about your shadow box because I could relate to it since my parents came here from Mexico and automatically there are people who think that I was also born there or they assume where I am from just based on how I look. It is important for people to know that not everyone who is Latino is just from Mexico because there are so many other countries. Your story is really powerful and breaking down stereotypes is something we should all do to get more people to understand.
-Esmeralda

Dear Kelly, I found your post to be extremely insightful and you have a great perspective. I love how you mentioned that your parents immigrated to the U.S. in order for you to have a better life. It seems that you are extremely appreciative of them and as a child of an immigrant myself I found myself relating to you throughout that section. Often lost in this narrative of Donald Trump speaking negatively of immigrants, is the fact that these were just individuals who wanted a better life for themselves and their children.

I really like how your shadow box embraces multiple identities. One part of your art piece that stands out to me is the “girl power” logo, which shows you embracing this important piece of your identity. It is also great that you decided to include where your family is from because it shows that you are proud about your roots. I look forward to seeing the next thing you post related to breaking down stereotypes and proving society wrong.

Dear,Kelly i really liked your shadowbox and all the characteristic about it I also liked how you represent girl power and the counter narratives to it but you show the opposite of them which is really amazing and empowering another thing that really stood out for me was the 3 flags that you show pride in all of them but i’m guessing you like mexican pride the most since its the biggest.overall youre shadow box is really good!sincerely, Anthony

I personally really enjoyed hearing about your family being Salvadoran. I definitely know that I do not always connect Latina or Latino with being from a state other than Mexico. I often attempt to keep an open mind when I hear the term Latino or Latina because I was never really sure what it meant until recently. I would like to hear more about experiences that you have had concerning being Latina and Salvadoran. I found you story to be interesting and powerful. I now that I have heard the stereotype that the oldest often has the strictest set of rules, but you seem to be taking those rules and standards and raising the bar even higher. That is hard thing to do as a high schooler and also struggling with people thinking you are one person but really you are another.