Fake News and how to stop it

Home Fake News and how to stop it 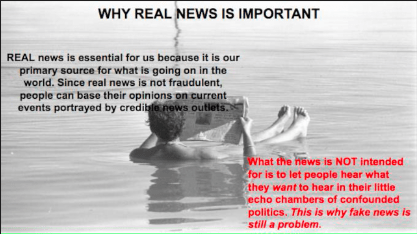 I feel that fake news is a very serious issue that affects any nation of the world, and it should be addressed more often in politics. The media plays a very important role in not just politics, but also in society, as it brings us information about current events and such. However, news can be warped in just the right specs just to fool the masses for economic gain or fulfilling a political agenda. Normally, this is the result of “sponsors” who pay the outlets to spew their fear mongering and bias claims to their followers. With that in mind, this can be dangerous for a democracy-like government because of how easily it is to control people’s minds to sway the political atmosphere.

While this is a very serious issue, a lot of people do recognize it as a problem. And it can even be easily spotted if there are click-bait titles, obviously biased stories and the like. So this problem can be fixed to a certain degree with the help of those who are considered above the lowest common denominator. If the people can stop falling for the septic tank that is the news media, then those news outlets will stop spreading lies and fear mongery.