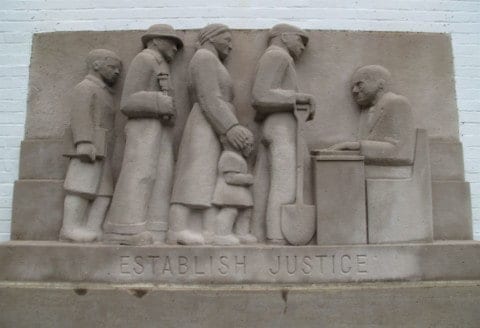 An important purpose of our government, as stated in the Preamble of the U.S. Constitution is “Establish Justice”. The president of the U.S. plays an important role in ensuring our government’s actions are working toward this goal. Among the most significant president powers that can establish justice are Appointment Power, Removal Power, and Ordinance Power. President Trump’s declaration to separate the U.S. and Mexican Border with a wall helps us understand the importance of Ordinance Power because it ensures all the laws that have been passed through the immigrants and citizens of the U.S.

Appointment Power gives the executive branch and the President, not Congress, the power to appoint federal officials. Basically, it means that the President can assign certain people to important roles in the Government. This can help ‘Establish Justice’ because of the people that Trump would assign. He could assign the correct and most qualified people to help build the wall along the border. For example, Trump appointed Brett Kavanaugh into the Supreme Court, believing that he would be the most qualified for the job. The same can be done with the emergency order to build a wall.

Removal Power is the congress and the courts have had to define the president’s legal authority to remove officials. Or, this means that, with the Congress’ approval, the President can also remove people from the Government. This could also help ‘Establish Justice’ because Trump can take people off of the government when they are not cooperating properly or breaking rules. For example, Trump removed James Comey, F.B.I Director, from the government because he was accused of misleading Clinton’s emails. He also did various other things that harmed Trump. This can help with the wall act because, just as he can assign the correct people, he can remove the people who are not correct for the job.

Ordinance Power is to issue executive orders; originates from the Constitution and acts of. Or, it gives the President of the U.S. the power to run the executive branch and to issue executive orders. This can help ‘Establish Justice’ because this is the thing that allows Trump to declare a National Emergency to build a wall. For example, Trump gave out a National Emergency in order to get money to build a wall across the Mexican Border. Ordinance Power can help with the wall act because Trump is allowed to make orders like this and can ask the government for help with it.

Trump brought Ordinance Power to life by declaring a National Emergency and asking the Congress for help with it. Trump was originally going to make Mexico pay for the wall, but he found an alternative that allowed the U.S. to build the wall themselves and save millions of dollars. If Trump had not found that alternative, the Congress would have not agreed to make Mexico pay for it. Trump changed the wall because he wanted to U.S. to have a more friendly appearance, rather than a very bossy appearance. This will affect the U.S. positively. In Conclusion, In order to Establish Justice, President Trump’s declaration to separate the U.S. and Mexican Border with a wall helps us understand the importance of Ordinance Power because it ensures all the laws that have been passed through the immigrants and citizens of the U.S.