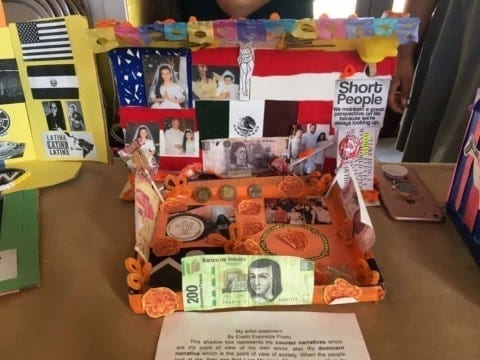 This shadow box represents my counter narratives which are my point of view of my own world, also my dominant narrative which is the point of view of society. When the people look at me, they see that I am Mexican. Mexican is my ethnicity because my language is Spanish, my religion is the Catholic church, my parents are from Mexico. My race is Hispanic because I relate to Spanish speaking countries and or from Spain. But my nationality is US citizen because I was born in Denver, Colorado, United States. Many people assume that I am in gangs just because they heard or seen a lot of Hispanic in those groups that they assume that I’ll be in one too. Many people may believe that I kill people because there have been a lot of killings in Mexico so they think I bring that negative environment here too. Additionally, they may believe that I bring or sell drugs because of our president Donald Trump said during his campaign that we bring drugs so now society see us as illegal drug dealers. Overall theses stereotypes I see myself as a hard-working student who dedicates all her time in her education. One of my counter narrative that I display here is a certificate I got from Latino honor roll this year, this shows that I’m not in gangs and or do anything that is bad. I have chosen to include plenty of Catholic and Mexican items because I feel that theses are the most important values in my life and identity. Why, because my family is Catholic and Mexican, I grew up like that so is a title in my life story. Lastly, I include a female quote because is was an assigned identity that has affected me because of society and the way they see women. They see us weak but actually we are strong and we can do many things that society forbids us from doing.

Hi Evelin, my name is Summer I am junior about to be a senior at San Jose State University. I really love how your shadow box catches my attention. It very beautiful, creative, and informative. I too am a fellow Latina. I really like how you described your culture, from the language to the region you are from. There will always be someone who will try and put you down or say certain things about ones culture that are not true, like President Donald Trump. I like that you mentioned him because you are a perfect example of the opposite of what he says we are. You are brilliant and hardworking and a strong Latina.I can see that from the information you have said. I wish you nothing but the best in your future and to always push through stereotypes that people may have of you. Great work!

Your box looks very creative and has lots of information attached to just the items. Stereotypes are something that I feel most minorities have felt in the United States and it is something that we need to work on. I like how you talked about being on the honor roll and how it defies the stereotypes against you. There are a lot of things that might try blocking you, but you can do whatever your heart desires.

Dear Evelin,
your box was very well detailed with pictures of yourself when you were younger and pictures with your family. I also loved how you used the mexican flag to show your pride of your country it is really moving because of all the drama that is going on you still care about your home even though you are here. I also liked how you put quotes in about being short because that is something that’s not holding you back but is making you stronger. Keep believing in yourself
From, Christina

Thank you for sharing Evelin. I completely agree with the idea that there are many false stereotypes that are running rampant in today’s political climate. I wonder what you have planned for your future, and how you plan to achieve your goals?

I’m glad you like my shadow box,Branigan ! I have a lot planned for my future, the biggest one is becoming a Nurse.
Thanks