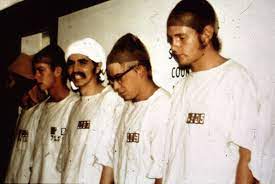 The Stanford Prison Experiment was cruel and inhumane but led to great psychological change and discovery. The study was created in order to understand the effects of norms, labels, and societal expectations in a simulated prison environment. Psychologists wanted to figure out why guards had brutal attitudes toward prisoners, being whether this was part of their personality, or if it was due to the prison environment.

The experiment was advertised in the newspaper. It took random volunteers and split them into prisoners or guards by a coin flip. The psychologists urged the guards to do whatever was necessary to keep the prisoners under command. Prisoners had extreme breakdowns and the guards used excessive violence. The prisoners believed that this experiment was reality and that they were trapped. Zimbardo, the head of this experiment stated,  “At this point, it became clear that we had to end the study. We had created an overwhelmingly powerful situation – a situation in which prisoners were withdrawing and behaving in pathological ways, and in which some of the guards were behaving sadistically.” The experiment that was supposed to last 14 days was stopped after 6 for concerns of abuse.

This experiment led to a change in ethical guidelines given by the American Psychological Association. Guidelines like extensive debriefing, informed consent, right to withdraw, and protection from psychological and physical harm were put into place. This study is heavily criticized and brought an ethical change in studies going forward. Banks in a research article states, “The study has received many ethical criticisms, including lack of fully informed consent by participants as Zimbardo himself did not know what would happen in the experiment (it was unpredictable),” in defense of the study.

Dear Emmy,
I am very interested in your post about the “Stanford Prison Experiment” because I actually did research on this not too long ago. I didnt think that many people had heard about it until I ran into your post. This experiment was very interesting to me because we were able to see what happens when someone has a lot of power over the weak.
Something you said that stood out to me was, “The prisoners believed that this experiment was reality and that they were trapped.” I find it interesting how they  thought that it was actually happening even though the experiment had only been going on for 6 days. It makes me realize how detached we can be from reality after a certain while.
Overall, thank you for your writing, I really look forward to what you write next because I enjoy reading about these experiments. I would like to know your thoughts on other popular experiments in the future!