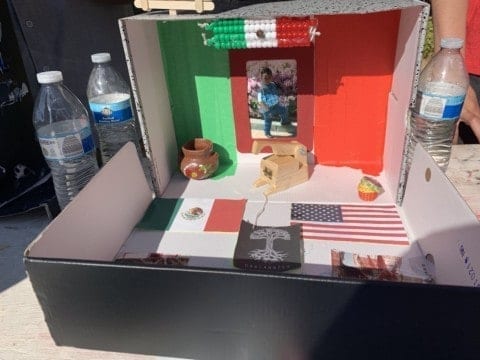 When people look at me they see my assigned identity which is being light-skinned and sometimes they think I am White. But my chosen identity is Latino, a Mexican. I have chosen to include the Mexico flag because that is a nationality that I am super proud of. I also chose to include a wall to show struggle, this is the type of struggle that made up my assigned identity being white. Which I refer to as a dominant narrative because nowadays all Mexican people are referred to aliens for crossing that wall. This then proves my next point of erasure because “supposedly” we are the immigrants but let’s not forget that Mexico owned most of the U.S but the U.S stole the land.

Hey Juan! I am a student at San Jose State University! I really connected to your shadow box because a lot of people do not think I am Mexican because I am light-skinned. What I found interesting was the wall that you included that represents a struggle. I enjoyed all of the Mexican objects that you displayed in your box.