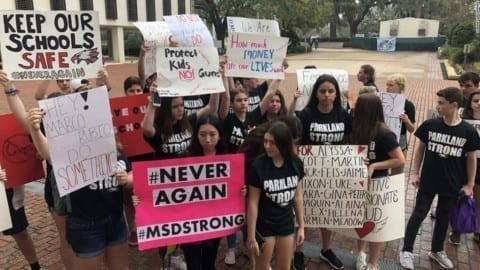 It is clear that all lives should matter but in our society or shall I say in this world all lives doesn’t matter. When the Black lives matter movement began it was completely ignored. When the nine black people were killed at the hands of a racist white man that was ignored, the police took him to Burger King to eat. I didn’t see anyone protesting against that. Now our recent shooting of an unarmed black man in his own year talking on the phone when police shot him over 20 times.

Now I’m not saying it is right for someone to go into our schools and open fire on innocent children, but if we’re going to rally let’s rally over all shootings. Our country only recognizes when a white person or people are killed. They go all out to stop the violence and the crazy thing about it is that they are killed at the hands of another white person. Black people are not shooting or placing bombs in these schools.

Gun violence isn’t new, it has been a crime since the slavery. Black people have and are still being executed by the hands of whites, mainly our police officers who are supposed to be protecting us. Yes I say let’s get s handle on gun violence but not only for one race but for all races, not just when a white person or people are being killed. Until everyone is treated fair it won’t stop.

The National Anthem states the land of the free and the home of the brave. If this is true then society needs to get it together.The March for lives on Saturday was awesome and recognized all over the world. Now let’s march for ALL lives.

All of your claims are speculation and completely wrong statistically. White people have a much higher percentage chance of dying to the hands of police than black people. All the BLM movement did was further divide this nation and spark the idea that murdering innocent police officers is completely okay. Which people did right as the movement began. You say it was completely ignored which is not completely wrong. They just made up the “hands up, don’t shoot” false narrative to get attention. After that, the entirety of the political left got on board because the had nothing better to do. So, this entire post is based on a straw-man argument and is completely wrong statistically.