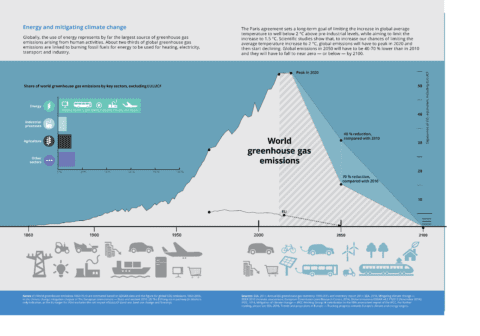 Climate change has been a growing issue to the human race ever since its beginnings in the industrial revolution. Even though its effects aren’t immediately threatening, they have started to become more noticeable in the form of rising sea levels, extreme weather, flooding, droughts and storms. The cause of this drastic change on our earth is the large amounts of greenhouse gases that are released into our atmosphere each year as a result of many different human activities — mainly burning fossil fuels for energy to be used for heating, transport and industry. Another negative side effect of the combustion of fossil fuels are the air pollutants they create that harm the environment and human health.

Recently I read and annotated, “Energy and climate change”, an article by the European Environmental Agency (EEA) detailing Europe’s proposed solutions and goals for reducing overall greenhouse gas emissions. The main trend throughout the article was the general idea to reduce emission using two methods: opting for cleaner energy sources and reducing overall energy consumption. However there were also many challenges described in the article including limiting emissions in the transport sector, reducing dependency on power plants and also external impacts such as deforestation.

Despite these challenges, it looks like Europe has done an amazing job with cutting emissions across the continent. Many international goals and industrial innovations have allowed them to improve each sector of their economy greatly to produce less emissions, whilst maintaining productivity. I believe that if they stay on this path, it is likely that Europe is going to be a zero-emission area by 2050.

Overall, Europe’s ambitious goals and innovative technologies have helped them to decrease total emission by 24% in merely 10 years (2005 to 2015). This is an amazing stride in combating climate change and promoting energy efficiency, which will hopefully inspire other countries to do the same. However, Europe makes up a tiny fraction of global greenhouse gas emissions, so if we want to have any hope of ending climate change, the rest of the world must follow in Europe’s footsteps.

Here is the annotated article on NowComment: https://nowcomment.com/documents/262436