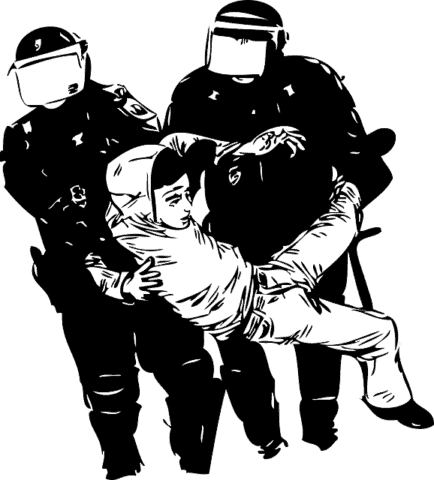 In recent years, police brutality has become a major issue especially along the lines of bias’ and discrimination of minorities including, race, gender, sexual orientation, class, etc. Police brutality is officially described as an umbrella term to describe any unjustified or intentional harassment, verbal assault, physical/mental injury, property damage, or death suffered due to interaction with the police. As police brutality continues thousands of citizens are being harassed, violated and even losing their lives due to officers’ negligence and prejudice. As described here the election of our current president has caused police brutality to grow and become normalized. In the first month of Trump’s presidency, more people were killed by police than the entire last year combined. With rising violence and discrimination from the people who are supposed to “protect and serve us,” it is becoming more difficult for Americans to trust their government and the safety of themselves and loved ones. This is a problem that requires immediate action.

Police are the main perpetrators when it comes to police brutality, however, another problem arises with the corruptness of the justice system favoring officers over citizens and not holding the police accountable for their actions in the same way that a citizen would be. In this way, the police are unaffected by their actions and will continue to harass, violate and kill people until something serious is done about it. Officer’s bias plays a huge part in who is affected by police brutality. Studies show that minorities, especially within race, are often the most impacted. For example, 80% of people needing to appear for a court case brought forward by officers are black and Latino, compared with 60% of all incarcerated people being black or Latino, it is clear who is unfairly discriminated against in our justice system. This doesn’t mean that police brutality only happens along race lines, as mentioned earlier it tends to be minority groups affected the most. Other minorities such as the LGBTQIA+  and homeless communities are often victims of discrimination and violence. Hundreds of (peaceful) protesters are unfairly hurt, arrested and even killed because they are rallying for basic human rights. An example of this was the protest for the homeless camp out in Salt Lake, where hundreds of people rallied to give clothes, winter gear and shelter to the homeless (because police officers had taken everything they owned). During this protest, people were arrested, shot with bean bag guns and threatened with military riot gear, after the protest was over the media tried to cover up the police’s actions by saying there was plenty of space in homeless shelters when there wasn’t. Because of this, the public is also greatly affected because they are only shown extreme cases of police brutality which has become a norm. Without the proper information available the public is unaware of how normal police brutality is becoming, and why it is becoming such a problem.

In the past, many solutions have been presented to try and stop police brutality, you can see some here. These solutions include things like body cameras unable to be turned off, better training for officers dealing with the mentally ill, and oversight from a community group to keep police in line. There have been many purposed solutions however, none have been implemented or put into place yet, but hopefully will be soon.

Ultimately there will be no one solution to end police brutality once and for all. In order to stop this epidemic, there must be a combination of solutions that will protect citizens and hold officers accountable for their actions. In order to do this several actions must be taken. Firstly police should be tried under a different justice system than the one they work for every day, this should be an independent source that will not favor an officer and that will treat them like any other citizen. This will work because the police will finally be held accountable for the actions they take in society, this will make future officers have to think harder about how to approach a situation and how they treat the people they are supposed to be protecting. In order for this justice system to work properly, we will also need proof of actions and intent, this comes in with the inability of officers to turn off body cameras at their discretion. The way body cameras work now, officers can turn them on and off potentially getting rid of the evidence of crimes they may have committed, if we take away the ability to turn off the cameras, no evidence will ever be lost and the justice system won’t be able to work in favor of officers. The next step to this solution will be to train officers in how to serve and protect without reacting inappropriately. In order to be an officer, police must go through several years of training, in order to make society a safe place for everyone including those who are mentally ill, officers should be made to take a course in how to comfort and confront people without putting their lives in risk by escalating a situation that’s unnecessary. By giving officers extra training we appeal to their humanity and make them think of the way they treat everyone they work with, after all, we’re all people and officers’ lives don’t matter any more than the rest of us. Finally, we need to have more oversight groups of officers which will ultimately give the public a say in the way they are “protected”. If we were to enact oversight groups we could set stricter rules for police to follow as well as create funnels of communication between the public and the law. By making communication accessible the citizens can voice how they feel about certain laws and vote on what and what should not be allowed in the justice system. This will work and help us all because we will have clear communication and expectations of each other. We have a long way to go in the fight to end police brutality, discrimination, and prejudice but in looking at our history and taking steps towards a better future, we have a chance to solve this problem.

There are so many issues that intersect with your topic–politic/political beliefs, experiences with the police, ideas about the police from childhood/family, race, gender, location/neighborhood, individuals (civilians and officers), etc. Definitely a complex issue and I love how you establish credibility by stating there will be no “one size fits all” solution to creating better relationships. I am excited to read about your solutions!

Great insight! Your elaboration on police brutality was well thought and eye-opening.I never really gave much thought unequal status police officers could have in a courtroom.