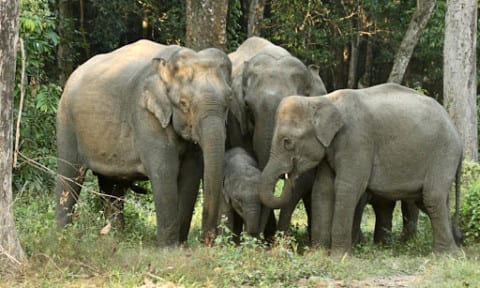 Endangered species are becoming a huge problem within the world. Many animals are dying due to less land, climate change, and hunting. When an animal is endangered, it means that there is a very scarce amount of that type of animal and they usually are in protective care. Many people try to help save the animals. There are laws on these animals on not hunting or hurting them. One endangered species that is a major problem and a concern is the Asian elephant.

Endangered species is a major problem within this world. An endangered species is the Asian Elephant. This elephant is the largest land mammal in the Asian continent (Asian). This elephant is usually targeted by hunters and poachers for its tusks. Their tusks are made up of ivory which is very valuable. There has been a growing trade recently with elephant skin (Asian Geographic). The elephant’s skin is being used for jewelry which harms both male and female elephants. This is wrong because humans are over-killing and not treating the elephants properly.

The Asian elephant has decreased significantly. The population of an Asian elephant has decreased by about 50% within the last 75 years (Asian Geographic). The elephants are highly endangered and being used/killed. This is a problem within our world. Many people take advantage of what is given to them. People have over poached/hunted elephants to the point where they are going extinct. The elephant population has also decreased due to deforestation and agricultural development (Asian Geographic). With the rising population of humans, this removes the animals from their homes.

In conclusion, endangered species are a major problem within this world. The animals are being used for humans’ personal gain. The Asian elephants are being killed for their skin and their tusks. There are laws against harming these animals as a way to protect them. The Asian elephants are decreasing at a rapidly fast rate. The animals that are endangered are going extinct and need more protection from people.