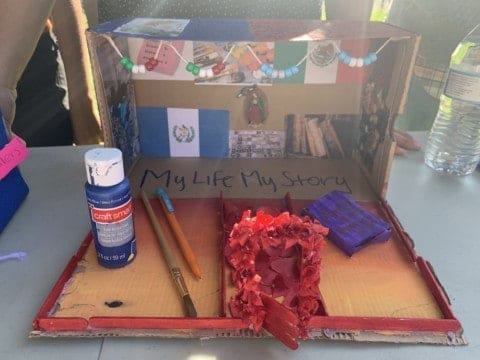 This Shadow Box represents who I truly am and what society thinks of me. The objects inside of the box are my counter narratives, the ones on the outside are dominant narratives. When people look at me I think they see a young female Latina who is nothing but trouble. There are counter narratives inside the box that are  proving that stereotypes wrong and lots of more. I have chosen the objects to show the true me. Mexican and Guatemalan flags are to show my ethnicities. Most people assume Latinx people are Mexican, but I am proudly mixed. A report card, rocks and the objects for painting remind me that I’m a creative, have a big imagination and I’m smart. The books picture show that I’m a reader but I’m not a nerd. On the side of the box show that I’m a younger sibling and the key chain of La Rosa de Guadalupe show that I’m Catholic. In front of the box one will see a door and isle, this is my red carpet to my life. Outside of my box is a dollar that is there to display that people think that Latinx people might live in a poverty area and that we are poor. One may also see two different types of gang and a gun on the back of the box that is there to display that society think that the majority of Latinx are in gangs. On top of this box there is a quote from Donald Trump this quote is not true most of the people coming from Mexico are looking for a better future. The moral of this box is to show that I’m trying to out live the stereotypes surrounding me.

Hi Esmeralda,
I am Maggie, currently studying at San Jose state university. First of all you did an amazing job on your shadow box. I think your description of your box was detailed and you explained everything very well. I totally agree with you that we should all outlive the stereotypes that’s surrounding us and just be ourselves. I love that you are proud of your own ethnicity because simply I am very proud of my own ethnicity and culture too.