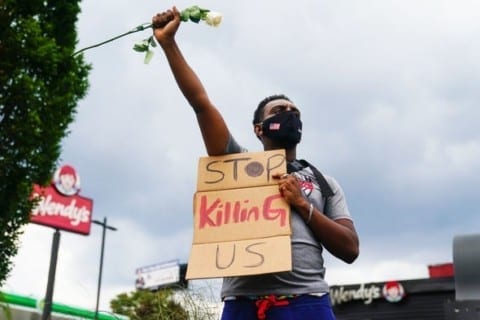 In the past year, America has experienced great suffering in regards to racial injustice, political polarization and the pandemic. These issues, regardless of their extreme prevalence, are only a small number of the issues that American’s have had to face this year. Each of these issues, affecting people of all age groups, has forced our country to once again face the never-ending question of whether or not our country lacks empathy. Empathy, the ability to understand and share how another person is feeling, is often considered to be a key factor in building and maintaining a properly functioning society. However, many have felt as though several Americans, whether it is citizens or leaders, lack any form of empathy. It is this question alone that has split our nation into two completely separate extremes.

According to Judith Hall in her opinion piece in Scientific American, “You don’t need to be a scientist to see that America is experiencing an empathy deficit.” Whether it is American citizens and leaders who refuse to wear masks or those who continue to deny the racial injustice that is present in our country, it is evident that America needs to reclaim its sense of empathy. One controversy in which this lack of empathy is prevalent is the controversy of whether or not one must wear a mask. Because this action is solely for the benefit and consideration of others, choosing not to do this is selfish and shows a lack of understanding of how others feel. If our country was empathetic, there would not be such a large group that refuses to partake in this safe action. Another time where Americans have lacked empathy is during the protests of racial injustice. A study describes how one third of our country still does not believe that there is any form of racial injustice still present in America (scientificamerican.com). This statement on its own reveals that we lack empathy because several of our people refuse to acknowledge the perspectives of those who are suffering with issues that we are unable to imagine.

Empathy, often defined as, “the ability to share and understand the feelings of another (Oxford Dictionary), is vital to the success of a country and its people. A lack of this important trait leads to division, disagreement, and an extreme lack of unity amongst our people and leaders. Although many Americans do show empathy, we must stop giving those who lack it a leadership platform or any advantage in our society. In the following years, we must work to avoid extreme political polarization, remedy our country’s empathy and, with that, reunite as a unified, dignified country.

Camille,
I agree that we, as a country, have to work on empathizing with each other. Especially in the past year, we’ve seen so many people unapologetically go against every moral code in favor of their own selfish agendas. While this year has really highlighted those situations, I think this has been going on for a very long time. Even looking at the foundations of our American Democracy, you see the prioritization of independence over the community. That being said, I do agree that there are people who are empathetic and understanding, but it is always the people who lack empathy who have the loudest voices. How can we highlight and give a voice to kindness in our country in the future?